In Thanksgiving to St. Joseph for our 30th Anniversary Pilgrimage to Canada

“In the course of that pilgrimage of faith which was his life, Joseph, like Mary, remained faithful to God’s call until the end.” ( St. John Paul II, Apostolic Exhortation “Redemptoris Custos,” 17, 1989.)

In God’s loving Providence, our Institute began until the patronage of St. Joseph on March 19, 1988, and we continue to rely very much on his paternal intercession. On March 19, 2018, we began the year of the 30th anniversary of our Institute. Recently, Sisters from the Province of the Immaculate Conception made a pilgrimage to the great North American shrine, the St. Joseph Oratory in Montreal, Canada. Bringing all the members of our province with us spiritually, we offered the trip, first, in gratitude and, second, in petition asking for St. Joseph’s continued intercession on our behalf. In total we were 50 sisters who traveled to Canada from various parts of the province: California, Minnesota, Connecticut, New York, Pennsylvania, Maryland, and Washington, DC. The main intentions of our pilgrimage included: vocations to IVE and SSVM, especially in our province, the spiritual and material needs of the Religious Family, the needs of the Holy Father and Holy Mother Church and, all the sick and suffering members of our family.

The pilgrimage began Friday November 23rd, when a group of us went to the morning Mass at the Carmelite Monastery in Brooklyn, NY. It was our first visit there, and we thanked St. Joseph when we quickly realized that our first stop was a monastery dedicated to St. Joseph! After Mass we began the road trip to Canada. By Friday evening, we all successfully crossed the border, and the complete group gathered for Evening Prayer (in honor of Blessed Miguel Pro) at our accommodations in Quebec City. We were quickly immersed in the French Canadian culture as we met our French speaking hosts and learned to take off our snowy, icy outdoor shoes before actually entering the building. After Evening Prayer, we enjoyed our Friday pizza night, which was followed by recreation.

Led by Mother Blessed Sacrament (missionary in East Harlem, New York) and Mother Parousia (missionary in Peterbourgh, Canada), on Saturday morning we arrived in the heart of old Quebec City at the convent of the Augustinian sisters to visit Blessed Marie Catherine of St. Augustine, patroness of our Province’s (former) Aspirancy. The life of this young French sister serves as an example of courageously following God’s will, of which she expressed her desire from the age of three. Entering the novitiate of the Hospital Sisters of the Mercy of Jesus at age 14 (in 1646) and inspired by the courage of the Jesuit martyrs, she quickly offered herself to “live and die in Canada if God would open its door” for her. Her presence was an answer to prayer for the Canadian Jesuit missionaries who in 1608 explained “their charity [women religious – the Uruslines and Augustinians] would do more for evangelization than all our steps.” As Sister Sarah, a young Canadian English speaking Augustinian, explained their historic convent, we were very interested to learn that St. Joseph is actually the patron of the country of Canada, declared in 1623 by missionaries who entrusted their pastoral work to this guardian of the Redeemer. We realized then that we were in a country that was dedicated to St. Joseph by its first missionaries! We were equally inspired by Blessed Marie Catherine’s unquenchable missionary zeal as she explained the three nails that kept her in Canada despite her failing health: God’s will, the salvation of Canadian souls, and her vocation. Lastly, we gathered to pray at her relics, along with a large relic of St. John de Brébeuf, which are both in a chapel in the convent.

Continuing to learn about the beginnings of the church in Canada, we visited two other saints who both knew Blessed Marie Catherine (canonized by Pope Francis in 2014 during the 350th anniversary of the diocese of Quebec): St. François Laval, first bishop of Canada, and St. Marie de l’Incarnation, an Ursuline nun whose community ran the Canadian schools. She is the patron of our convent in Peterbourgh (Ontario, Canada). To visit St. François Laval, we visited the cathedral of Notre Dame de Quebec, enjoyed a walk along the St. Lawrence River, taking in the views of Quebec and also the piles of snow, and finally headed to the Urusline convent, which has a beautiful chapel including the first altar dedicated to the Sacred Heart in North America.

In the afternoon, we drove out of old Quebec City past the spectacular Montmorency Waterfalls to arrive at the St. Anne de Beaupre shrine just before dusk. This large shrine receives almost a million pilgrims each year and houses a large relic of the forearm of St. Anne, the mother of Mary. Also, in the crypt of the church, we paused to pray at the tomb of Venerable Alfred Pampalon, a Redemptorist, who is the patron of those with addictions and died in Saint Anne de Beaupre in 1896. Finally, we experienced our first French mass for the vigil of Christ the King. Saturday evening, we returned to our accommodations for Evening Prayer, dinner, and recreation.
On Sunday, we arose early for Morning Prayer and breakfast and then we braved freezing rain en route to Canada’s Marian shrine, Notre Dame du Cap (Our Lady of the Cape), which is on the banks of the St. Lawrence in Trois-Rivières, Quebec. The devotion dates to the arrival of the Jesuits in 1635, and the shrine had various miracles in the 1800s. It was visited by Pope John Paul II in 1984. We paused to pray in the Basilica and old shrine, which is the oldest stone church in Canada.

Then, on our final stretch through Montreal to St. Joseph’s Oratory, we continued slowly through freezing rain to arrive for the midday Sunday mass of Christ the King. After Mass, we took time to visit the museum and tomb of St. André Bessette whose simple, humble, and deep devotion to St. Joseph led to the building of this magnificent shrine. Next, all fifty of us gathered in the warm candlelit section of the Oratory. Outside of St. André’s tomb, there is a large statue to St. Joseph along with hundreds of candles. As the choir sang “Te Joseph Celebrent,” Mother Immaculate climbed the candlelit steps to present St. Joseph with thirty lilies in honor of the thirty years of our Institute. Next, the professed Sisters read together their monthly renewal of vows, since it was November 25th (each 25th of the month we renew our vows, marking the day of the Annunciation). Finally, all the sisters joined in singing “Custodio de Jesus” (“Guardian of Jesus”), a traditional hymn in honor of St. Joseph. As we reached the final verse, a member of the Congregation of the Holy Cross stepped up to speak to the whole group. We listened as he explained that he was the rector, thanked us for our pilgrimage, and finally, reminded us as St. André would say that those who visit the Oratory always leave changed. After lunch, we visited the incorrupt heart of St. André, prayed at the various titles of St. Joseph, and went out to the old tiny chapel, the original simple structure from 1904.
In the afternoon, we drove outside Montreal onto the Indian reservation to visit the St. Francis Xavier mission, home of the relics of St. Kateri Tekakwitha, patroness of our Novitiate (which is also celebrating its 20th anniversary in Feb. 2019). We joined the priest there for Eucharistic Adoration, benediction, Evening Prayer, as well as a blessing in the original Iroquois language. After prayer, Father showed us the museum which includes the original monstrance, which St. Kateri would have touched and also prayed before. We concluded by singing Sweet Mother of My Country, a song which invokes the patrons of our communities and the North American saints. This was the last community stop of our pilgrimage. In the evening, we drove back into Montreal to be received by the very gracious Vietnamese community at St. Mark’s Church. With a festive meal, we gave a toast of thanks to St. Joseph for all the blessings of the pilgrimage. By Monday morning, the communities went their different directions for early morning masses and a full day of travel back to their convents.

As we give thanks for the pilgrimage in honor of St. Joseph, we beg his continued intercession for countless years to come. We recall the words of Saint Bernadine of Siena, ‘If Holy Church in its entirety is indebted to the Virgin Mother because through her it was judged worthy to receive Christ; after her, we undoubtedly owe special gratitude and reverence to Saint Joseph.’” (Quoting from St. Bernadine of Siena, Sermon 2, opera 7.) Saint Joseph serves as a patron of all: patron of the universal church, spouse of Mary, and father of the Incarnate Word. Finally, “we have a special devotion because of his most efficacious intercession; something we have experienced many times.” As our Institute began under his paternal guidance, through this pilgrimage in honor of St. Joseph, we ask for his continued intercession. May it bear fruit for our Religious Family and the whole universal church – for the glory of God and the salvation of souls. 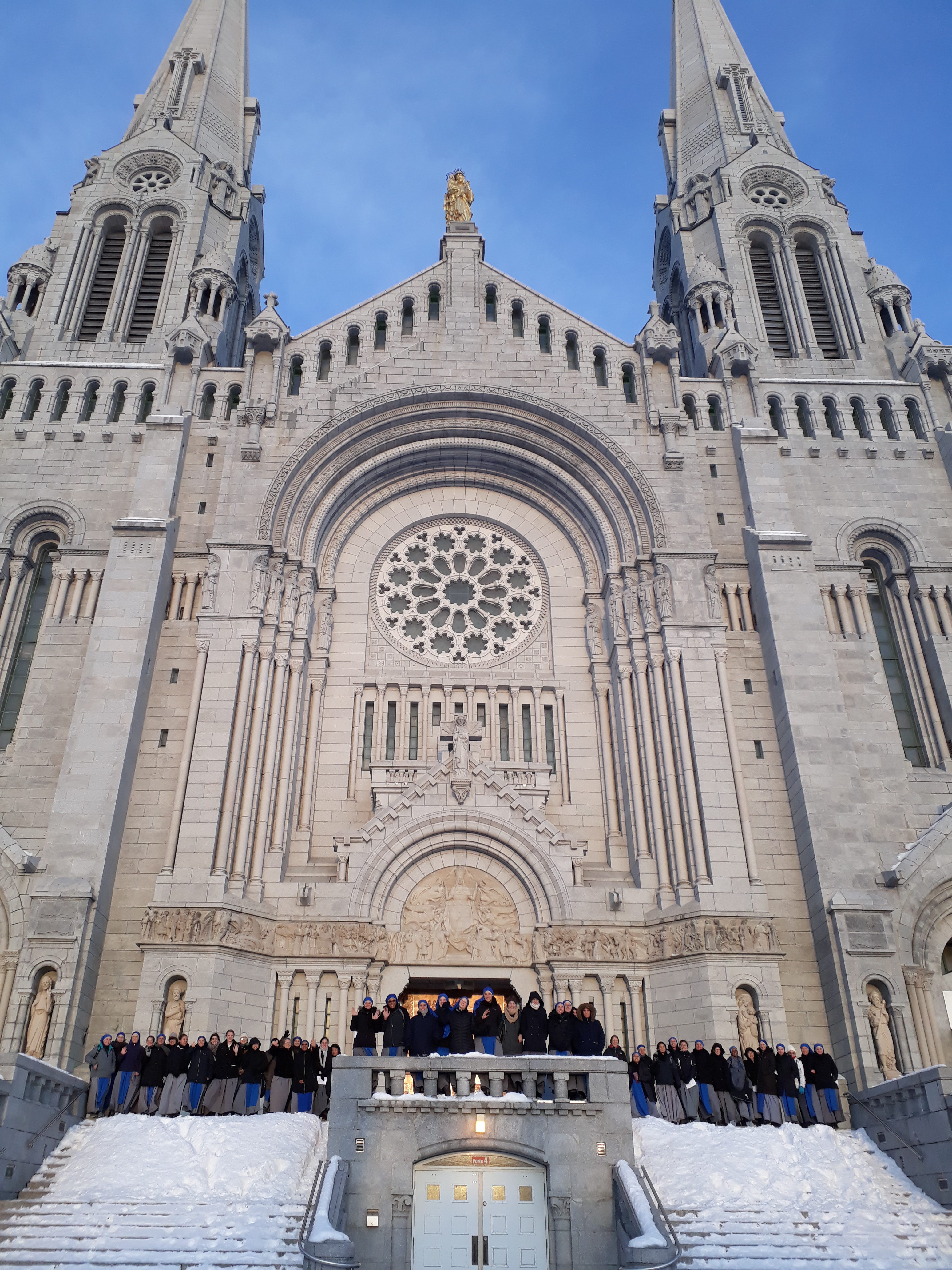 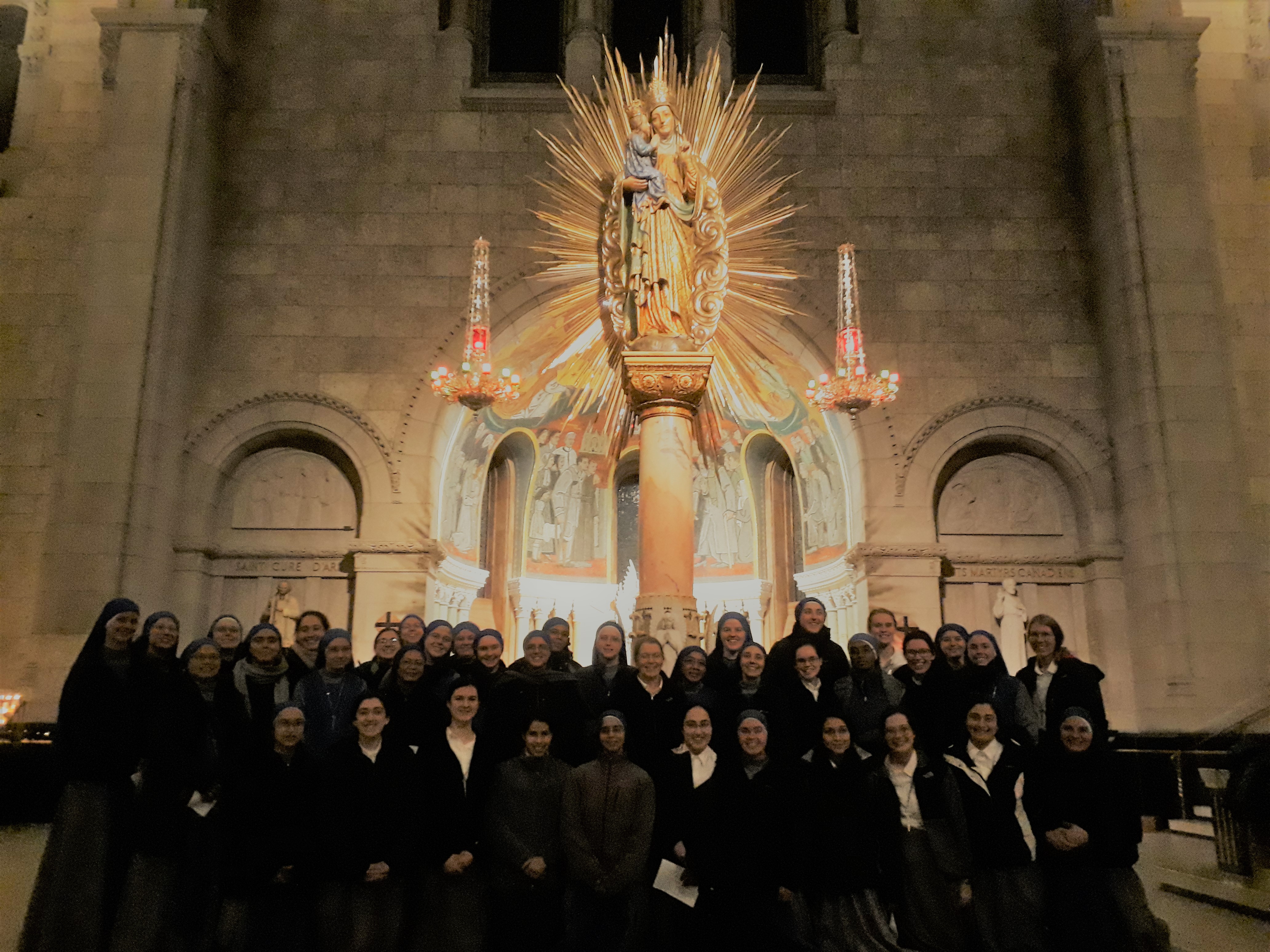 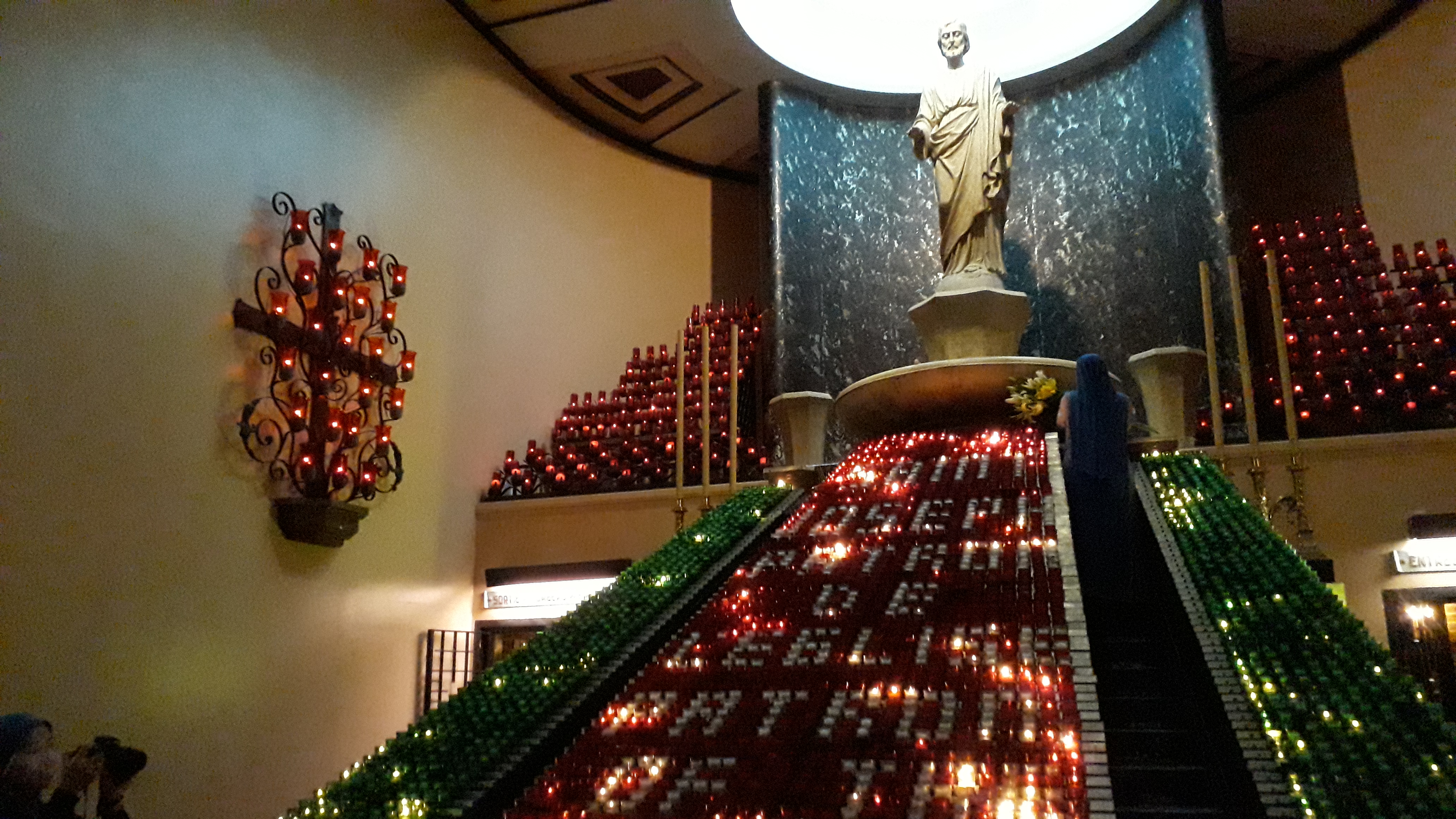 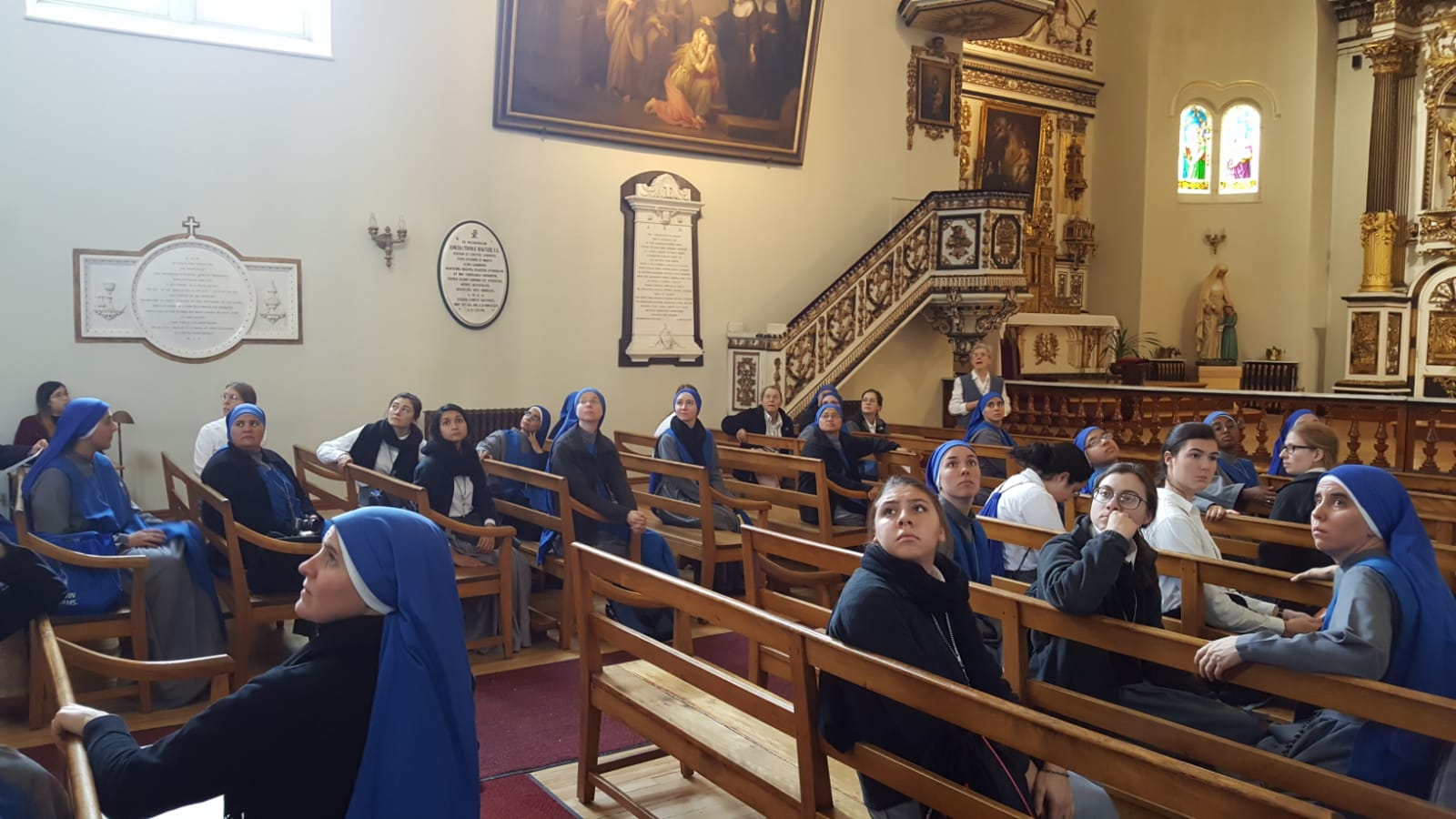 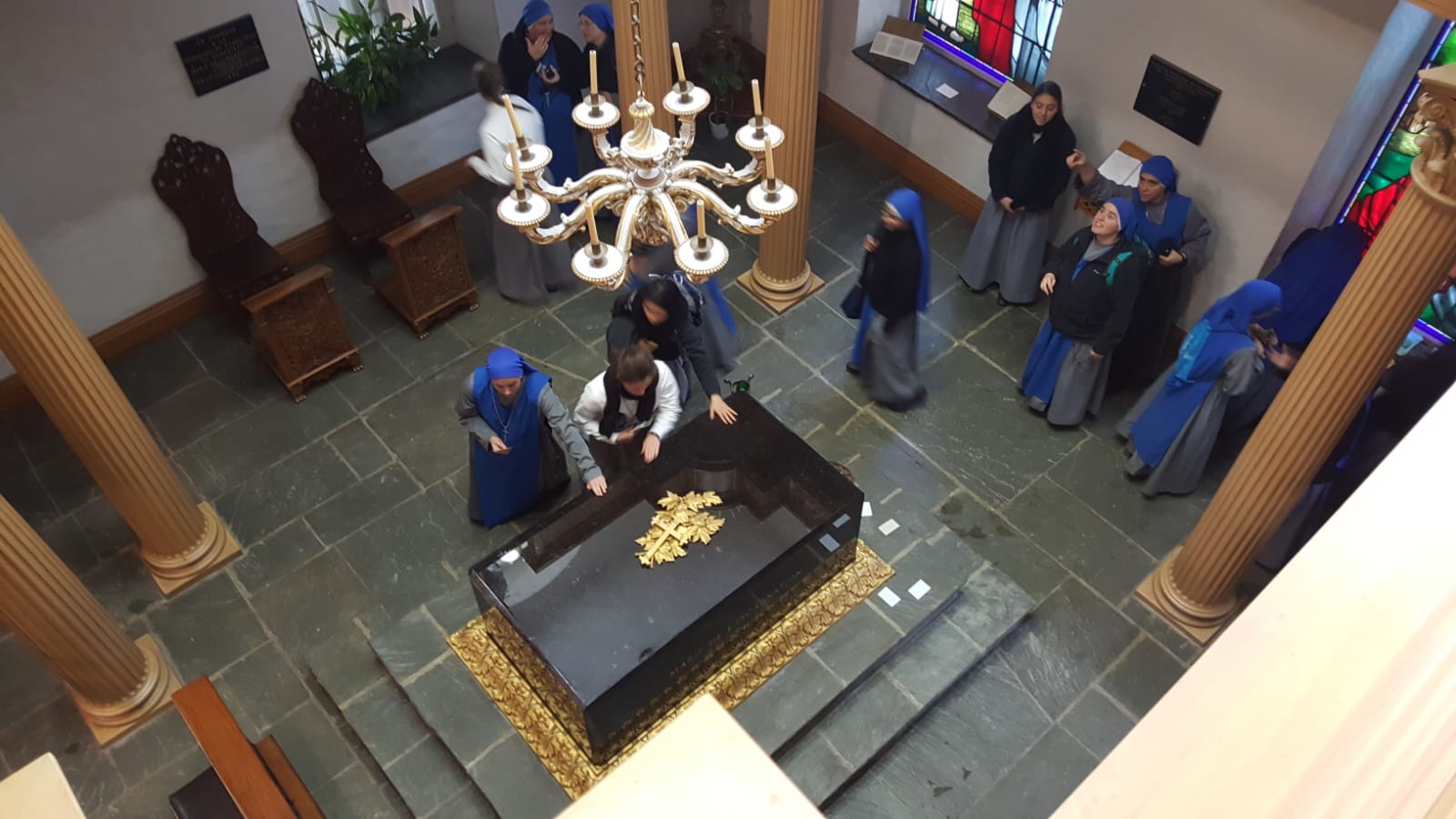 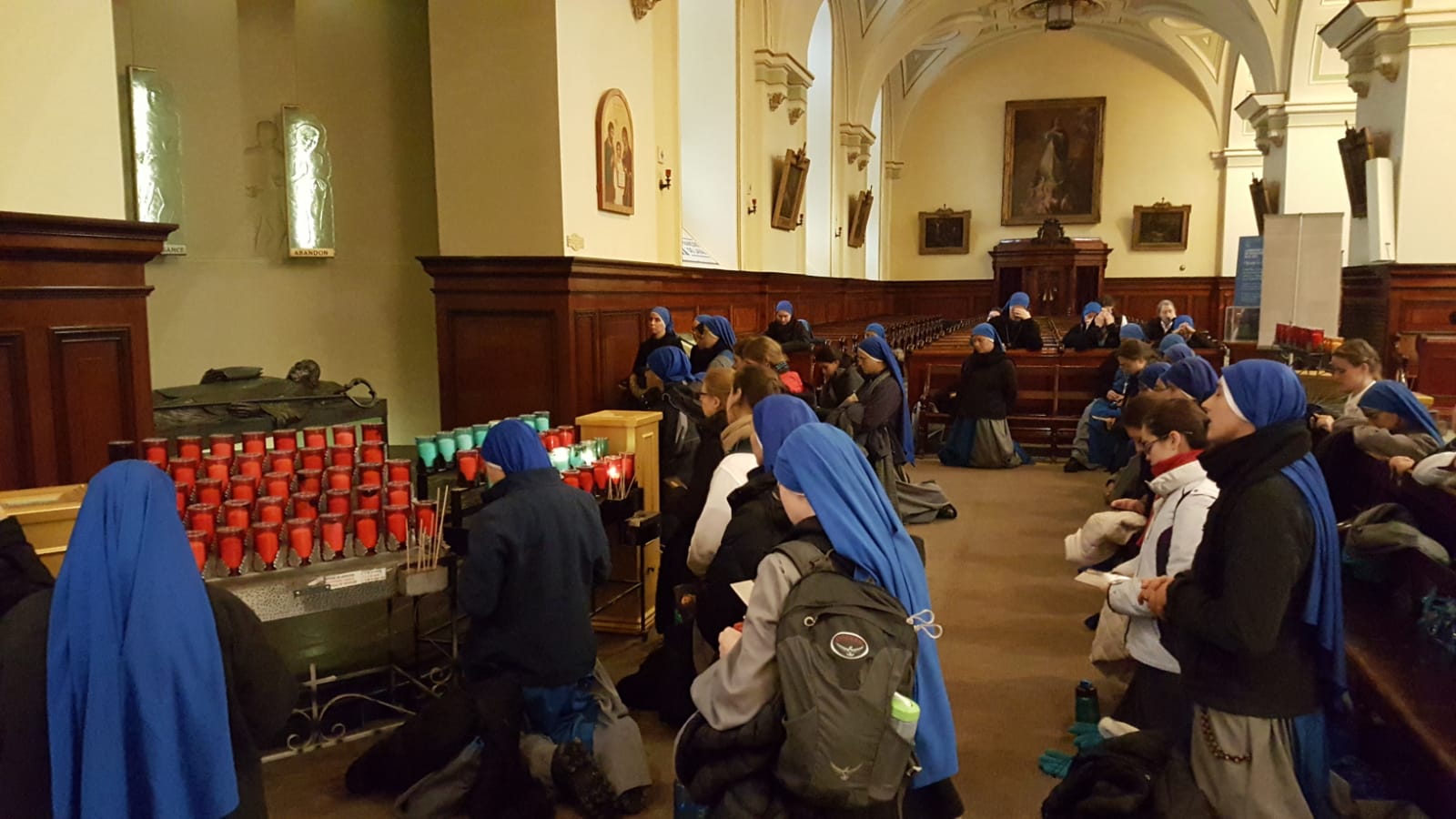 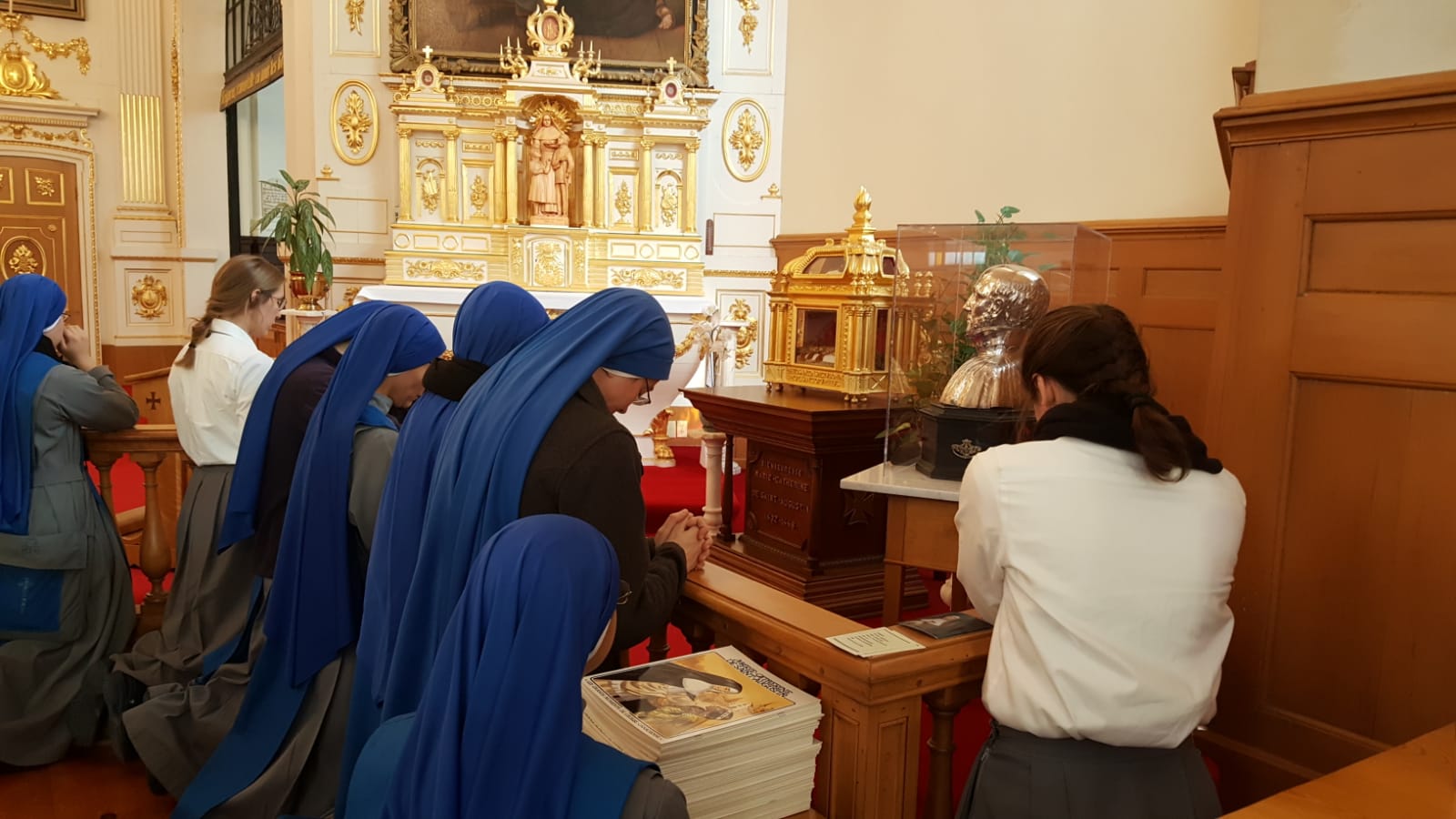 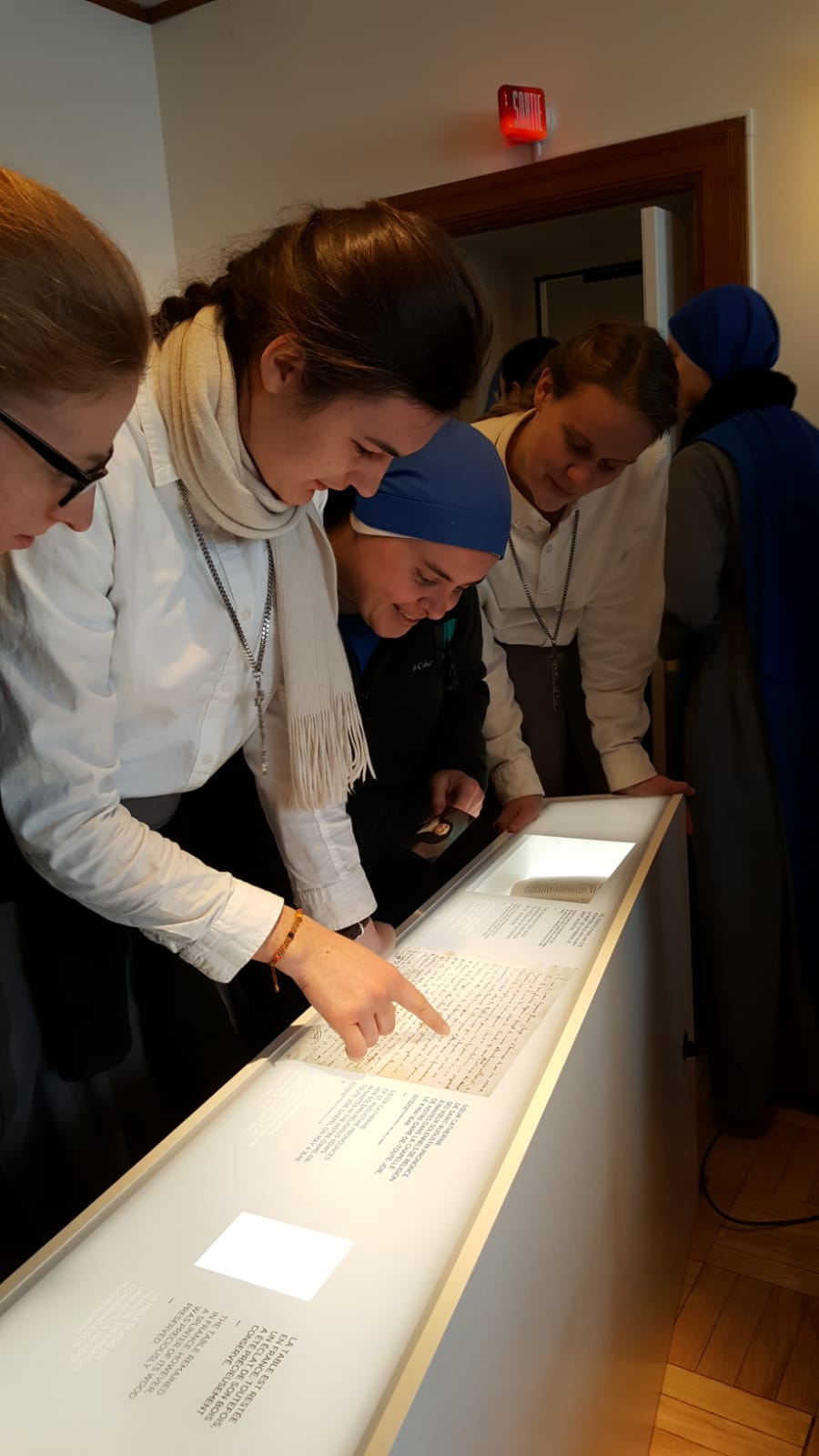 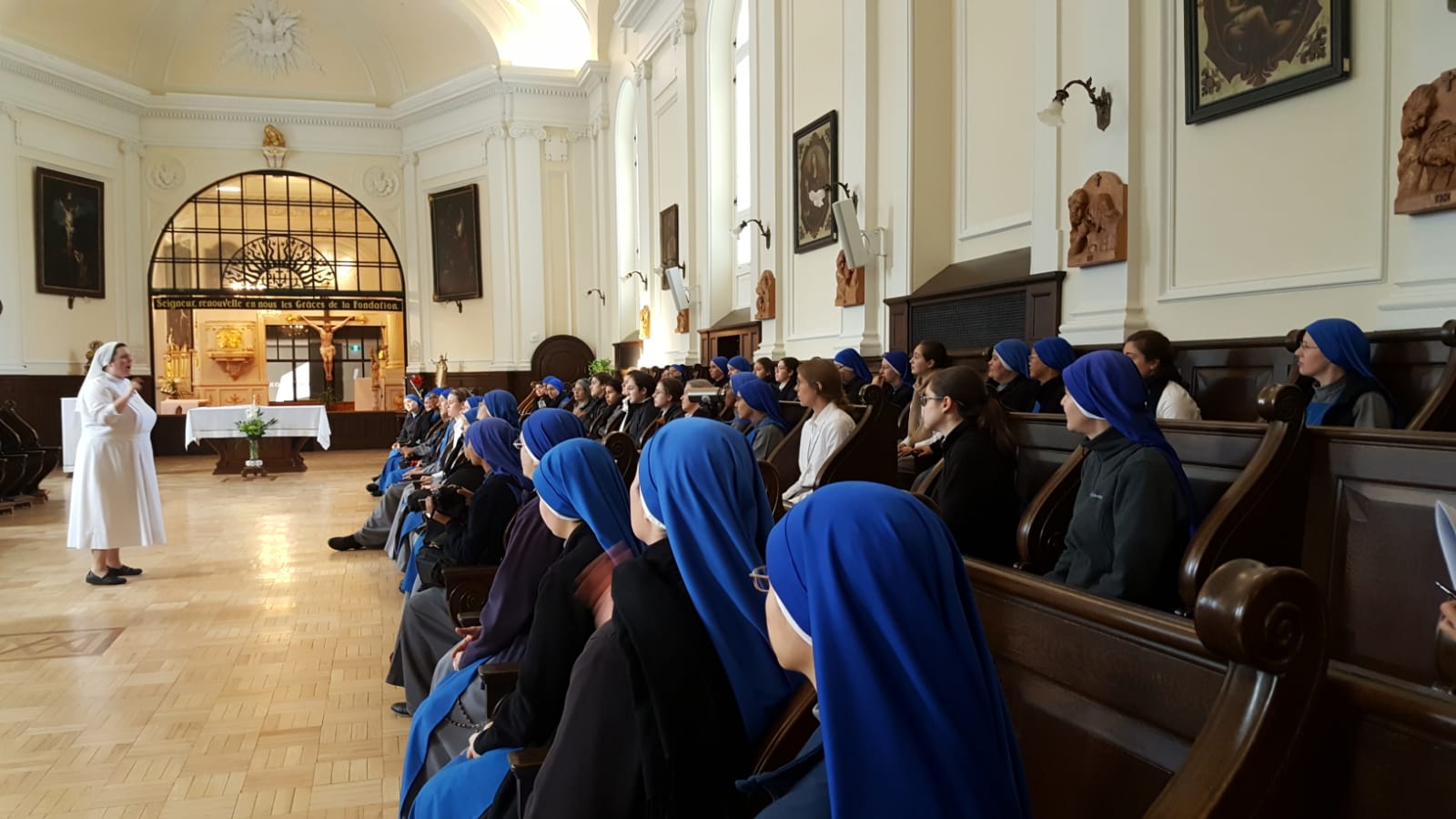 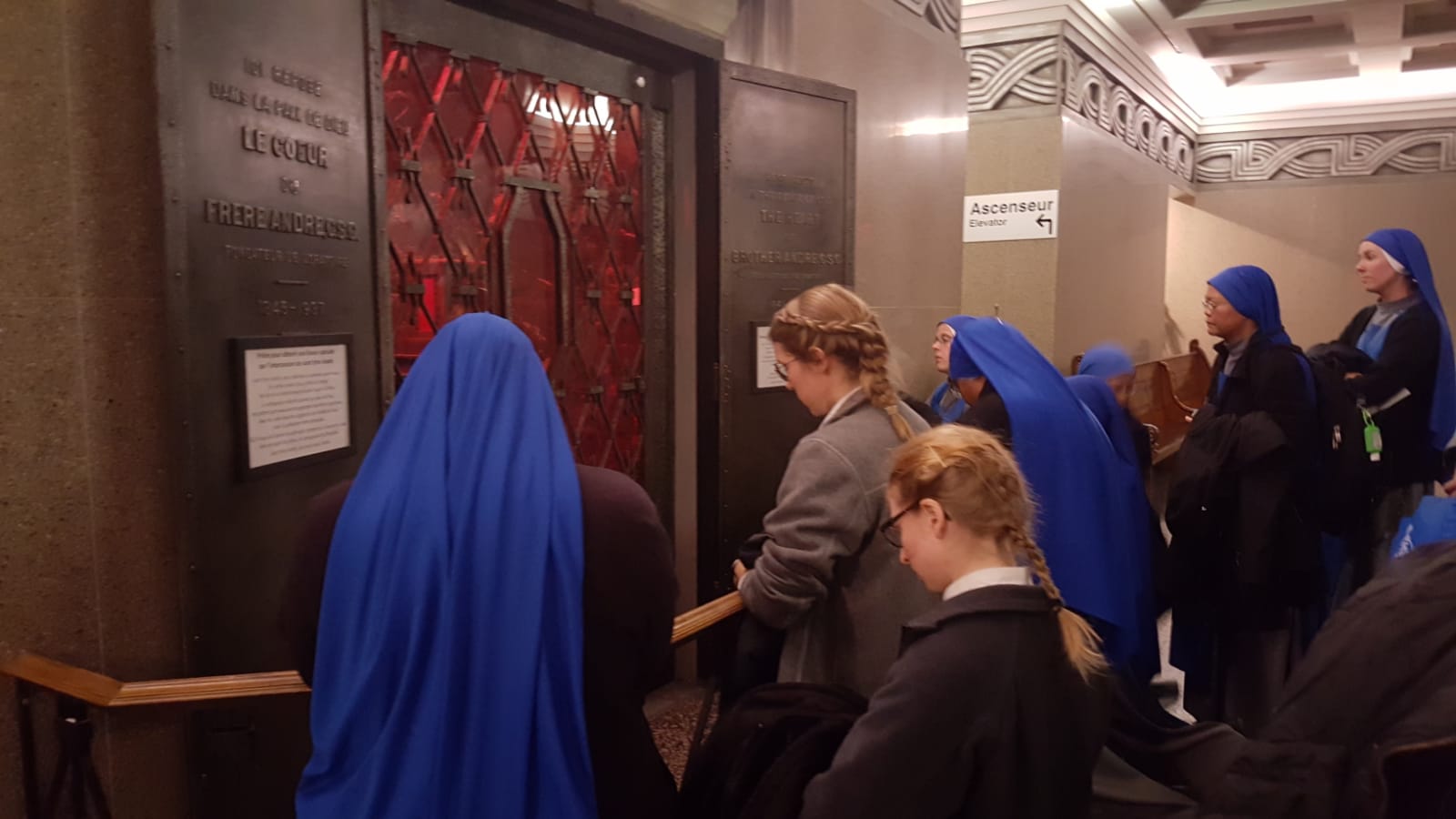 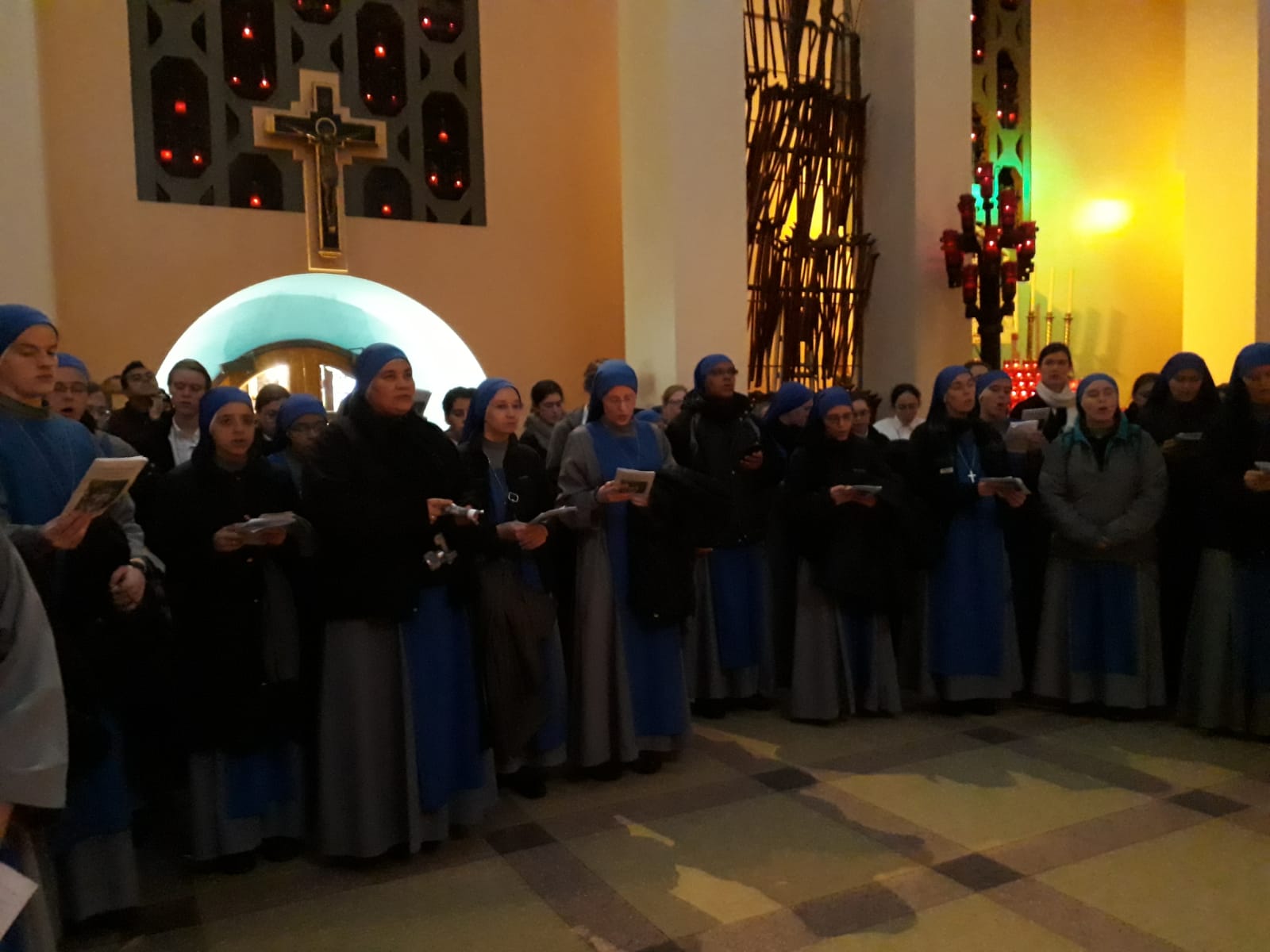 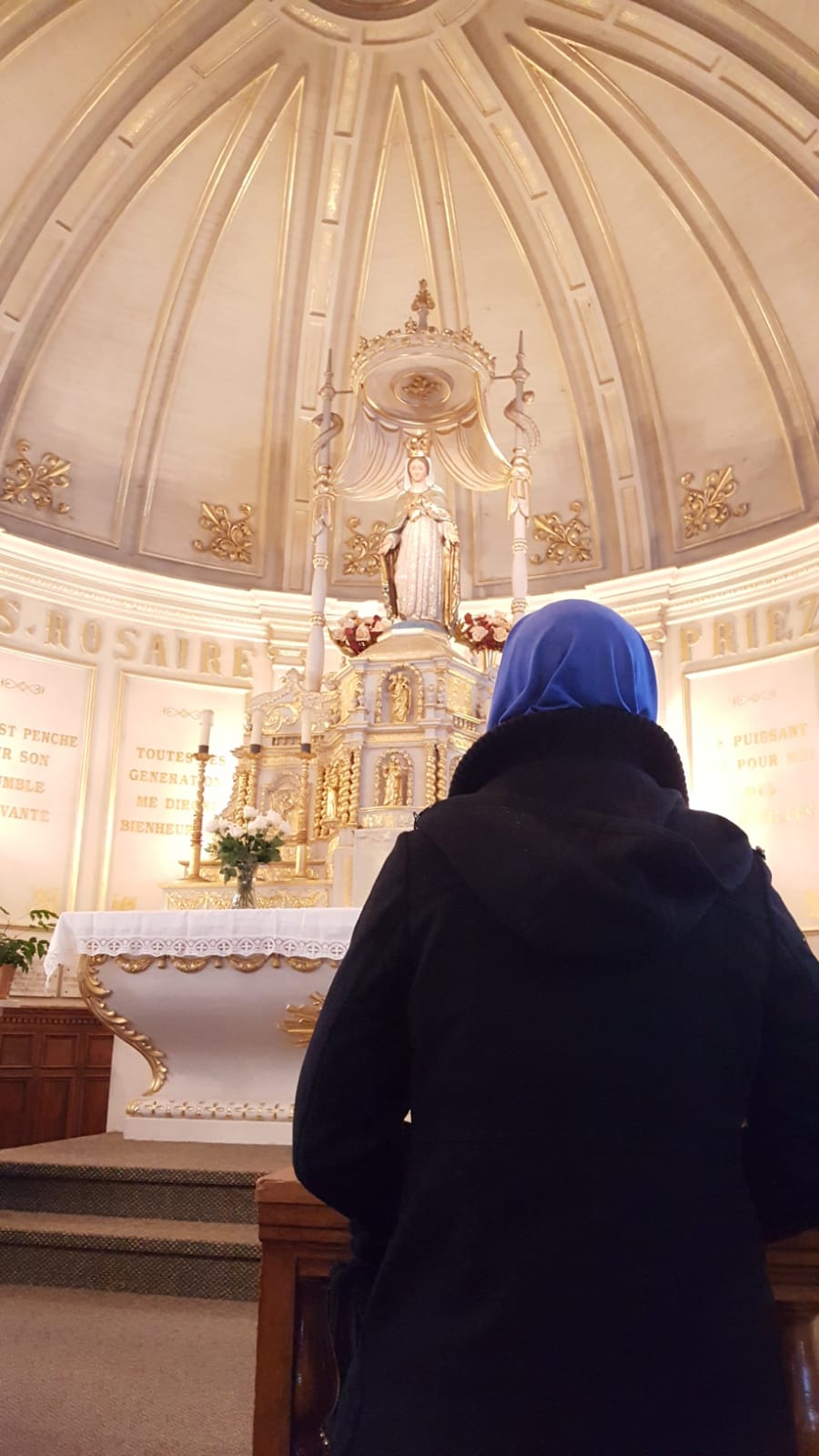 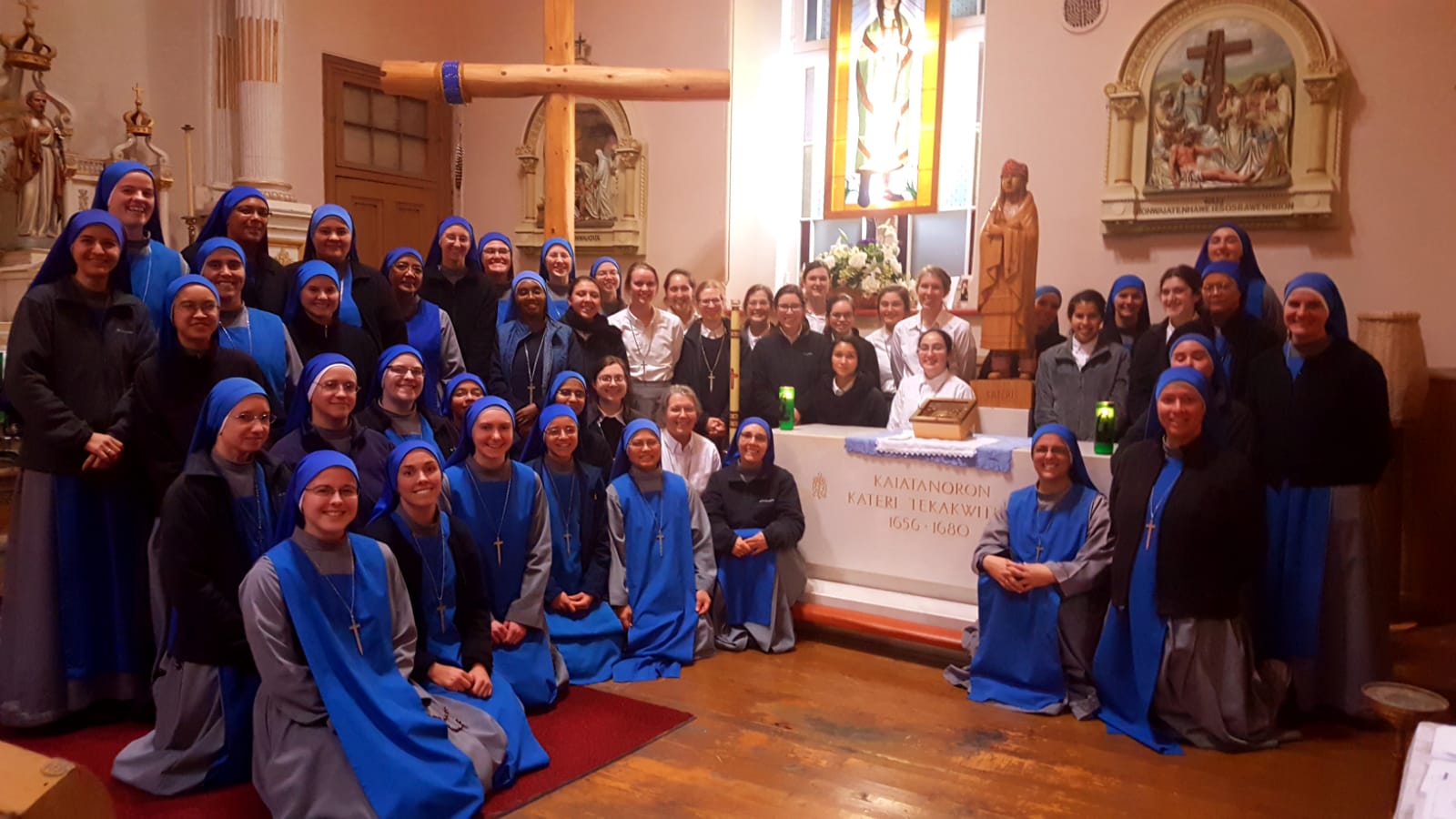