Don Gnocchi Group for Special Needs: A Most Holy Communion

This past catechetical year, I was given the wonderful gift of preparing twenty-seven children for their first Holy Communion. They were a delightful class and so eager to learn and practice the many virtues of which we so often spoke. One of our rules this year was Age quod agis et bone agis (Do what you are doing and do it well). This was one of the five rules of our class in which they especially excelled. When they played, they played; and when it was time for the lesson, I never once had to break up a side conversation.

Half way through the catechetical year, I was asked by the sister in charge of the special needs program at the parish to take on the instruction of one of the teenagers. I was told about the child just before catechism let out for Christmas break and this gave me a little time to prepare and plenty of time to beseech the Sacred Heart. “Antonio,” from what we were told and understood of him, was a very special case. He was severely mentally handicapped, he didn’t speak and they were not sure if he could comprehend much. At school he mostly did physical therapy, and we were told that the doctors had said that he would never really be able to learn because he was unable to remember. The goal for this year was to try and prepare Antonio to receive his first Holy Communion.

Christmas passed and catechism was back in session. Finally it was time to meet Antonio! The first thing I noticed was that he was capable of much more than was communicated to us. It is true that his memory is impaired. However, he could in fact remember and he remembered very well. I began to present a concept to him, and every time I repeated the concept, I would do it in the exact same way as before, even down to the inflection of my voice. Pointing at the crucifix, I would say “This is Jesus”. then I would ask a little bit later, “Antonio, Who is this?” He would look at the crucifix trying to recall the name of the One nailed there, and you could see him straining to recall what he really did remember. Then I would give the first sound of the name “J” and he would quickly say “Jesus!”. Even when we would pray together, he would race through the prayer ahead of me at certain parts. The problem was not the fact that he couldn’t remember., The problem was the fact that he could not recall his memories. All he needed was the smallest trigger in order to resurface the memory. From what I could understand, this also seemed to be the reason why he did not speak beyond a couple of words. He could not recall the words to express what he thought or felt, but he comprehended enough to understand two languages, English and Spanish. It didn’t matter in what language you spoke, it was all the same to him.

Because of Antonio’s inability to recall words in order to communicate to others, he often looked pained when he really wanted you to understand something. You could clearly see that he was often trapped within himself. I began to guess what he was thinking, and the first couple of times he looked a little shocked and exclaimed “Yes!” So we kept communicating in this way, and he would, each time laughing, respond with either “yes” if I guessed right or “no” if I guessed wrong.

At times, Antonio’s mood and demeanor would change, becoming very agitated and unaware of my presence. At first there was nothing I could do to calm him. Nothing worked – calling his name, tapping him on the shoulder, placing my hand on his arm, nothing. It began to make class a little impossible as this would happen frequently. One day was particularly difficult, and as usual, he did not seem to notice that I was there. Trying to calm him down,, I did what any mother would do to sooth a child in pain; I began to sing the sweetest thing I knew, The Kyrie from the Misa de Angelis. He grew calm and then looked at me with most lucid eyes and gave the biggest smile, so happy that I was there. This worked for him every time, and even prevented agitation. I would begin to sing as soon as I saw him beginning to grow restless. Eventually, he even began to sing along with me.

I had been telling Antonio about Jesus hidden in the tabernacle and the day finally came to take him to the church. The plan was to talk about the tabernacle, Who was in there, and to see the church and everything in it. When we went into the empty church, we all genuflected and went to the front pew. I asked him if he would like to kneel and he said, “Yes.” Together we prayed the Hail Mary, and then all were silent. Antonio knelt in perfect silence. For at least ten minutes he knelt there, calm, still, silent, with his eyes fixed on the tabernacle. Our Beloved Lord was speaking to his heart, and as I watched him, I could see the conversation happening on his face. I had never seen him like this before nor had I ever seen such clarity in his eyes. Then all of his own accord he began to pray the Our Father.

After this, there was no doubt. Antonio was ready to receive his First Holy Communion. The date was set for July 6, 2019 and we were told that he would be able to receive the Sacrament of Confirmation the same day.

The day before he was to receive the sacraments, we had a little rehearsal where the process was explained and Antonio was introduced to the pastor of the parish who would administer the Sacraments to him. Antonio was very happy and listened attentively to Father, keeping eye contact and nodding his head to show he understood. Then when the rehearsal ended, I took him once again around the church and showed him all there was to see, explaining what each thing was. He very gently touched the statues and repeated almost in a whisper the names of each as I told them to him. When we came to the stations of the cross which were out of our reach, he looked with sorrow at the image of Jesus crucified. I explained to him what he was looking at, and he pushed himself against the wall, inching his fingers as close to the image as possible. He said, “Jesus hurting. The cross.” He felt sorrow at the passion of our Lord, which also attests to his love. One cannot feel sorrow for that which they do not know or love. Truly Our Beloved Lord was teaching Antonio, in the silence of his heart, things which I could not. While we were continuing our visit around the church, I kept singing to keep Antonio calm. As I turned to explain to the sister who was accompanying us why I was singing, Antonio whipped his head around and looked me square in the eyes and gave a mischievous smile. He seemed to say, “I know you’re talking about me, and you know that I know.” So I said back to him “I know you know I’m talking about you!” And he smiled a great big smile and began to laugh. Yup, we officially had our own language.

Finally the day arrived! Antonio arrived with his parents all dressed in white and very excited. Upon seeing us waiting for him in the front of the church, he began to run and skip down the aisle, laughing. It made all of us laugh as well. It was a very simple ceremony with just a few sisters, Father, Antonio’s parents, and his Godfather. During the ceremony I had moved away from him so that his Padrino could sit next to him. When he realized the change, he quickly scanned the area looking to see where I had gone. When he found me he seemed a little confused as to why I moved. So I gave him a thumbs up and he smiled and gave it back.

When the time came, Antonio went up to the kneeler and knelt down in front of Father. Father administered the Sacrament of Confirmation. He received that indelible mark on his soul and was confirmed under the patronage of St. Anthony of Padua. Then, it came time for him to receive the greatest gift, Jesus in the Most Holy Sacrament, hidden under the appearance of bread. At this time, I was called to stand by Antonio’s side. Antonio received the One Who longed to be received by him, that most Perfect Teacher who taught him in the silence his heart, the only One capable of reading and communing with the innocent soul whom He now called to the closest communion in this life. After the ceremony came the pictures, and then after that when everyone began to move toward the back of the church, Antonio and I knelt down and prayed in thanksgiving for the sacraments received, and for a couple of other intentions.

It is Christ and the Holy Spirit Himself who are the first teachers when it comes to teaching the mysteries of the Faith. This is something I have always firmly believed, but my Beloved Lord took this opportunity to deepen my knowledge of this and to show me that that it is He who sets hearts on fire, and by His love and mercy, He often works this grace through us, the catechists.

Through the intercession of Our Lady, let us pray for the grace to always remain most faithful and docile instruments, that God in His infinite mercy may continue to work in us and make us collaborators in His work of salvation.

United always in the Most Sacred Heart,
Sr. Mary Guardian of the Child Jesus 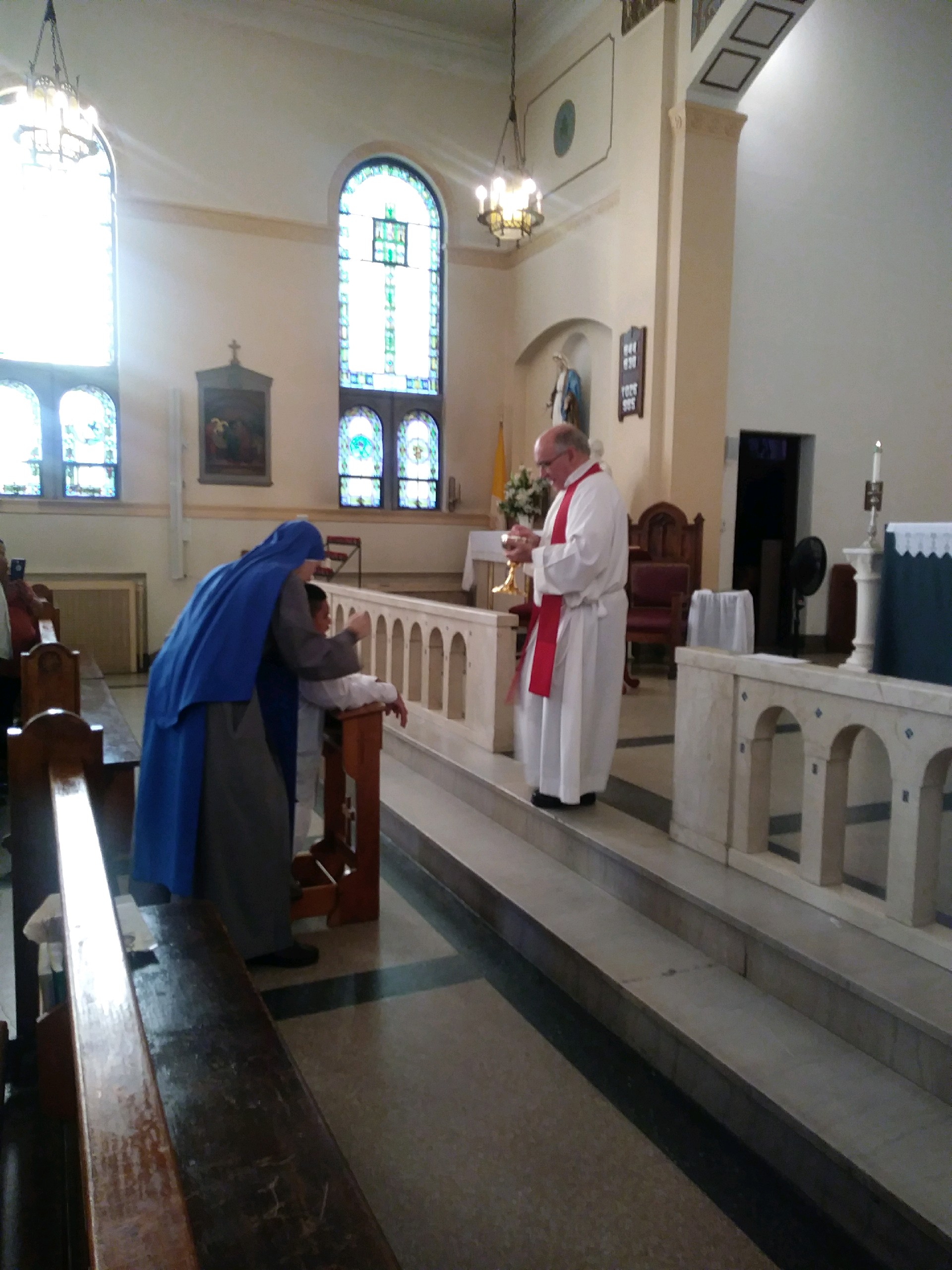 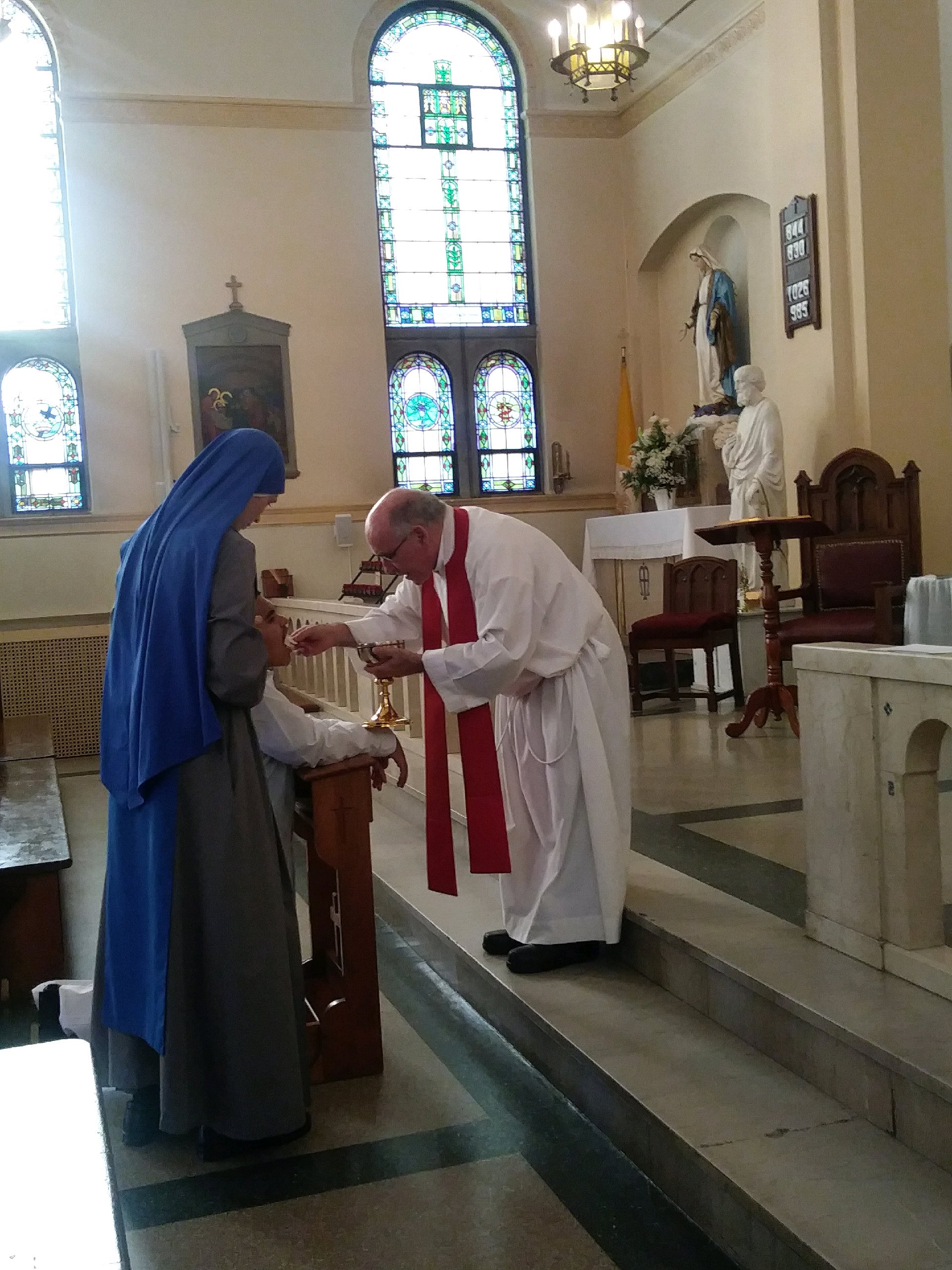 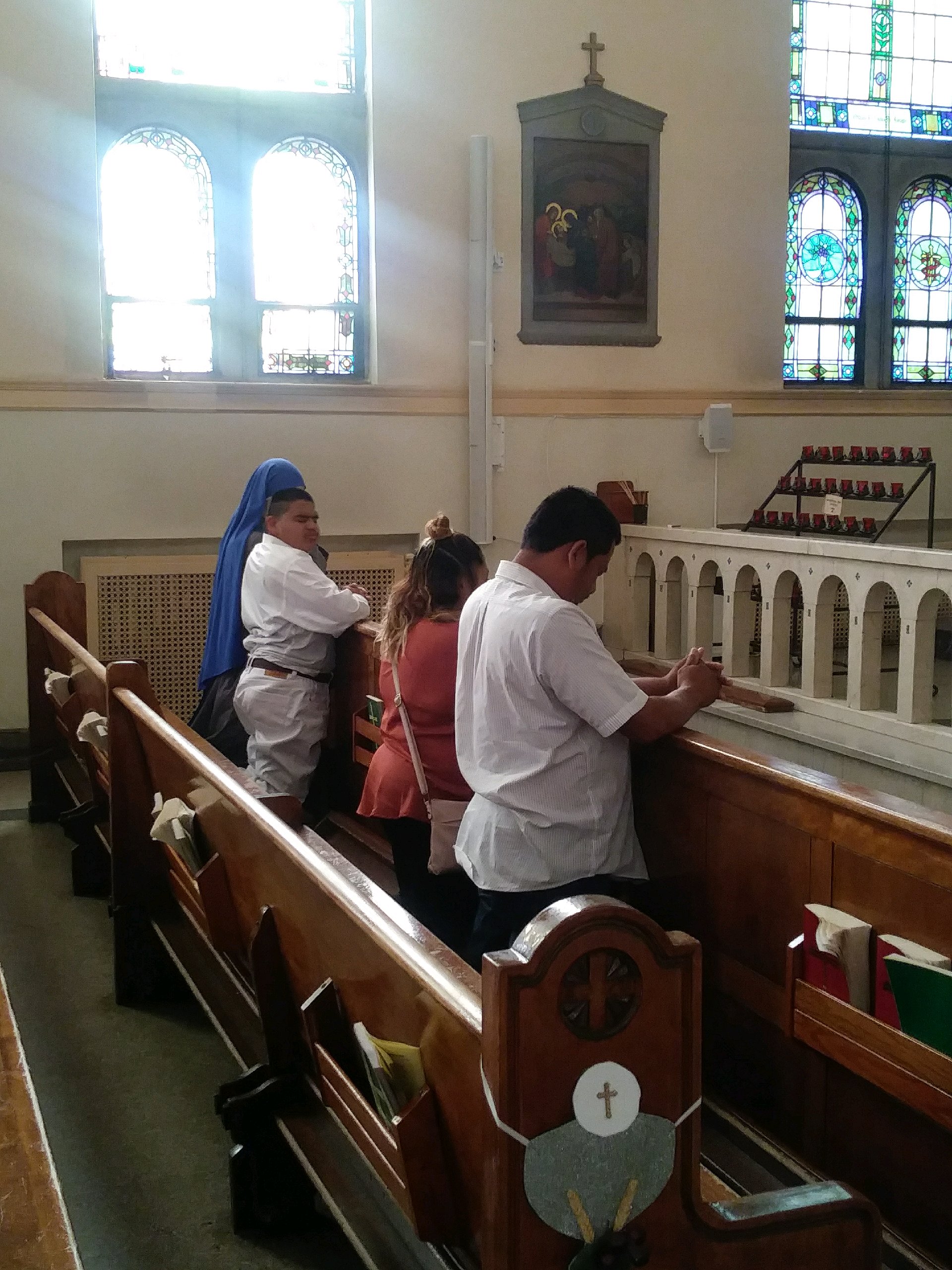 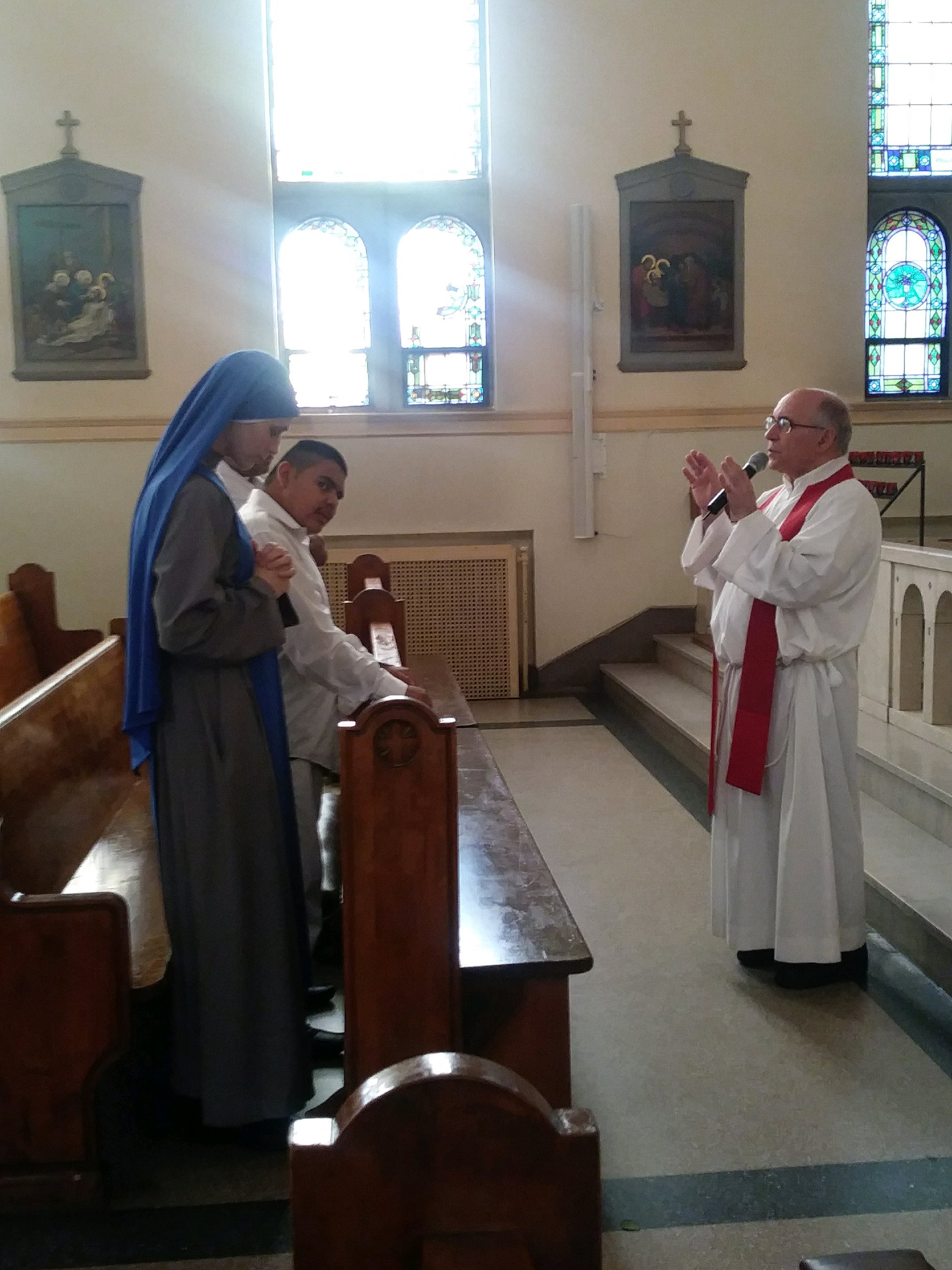 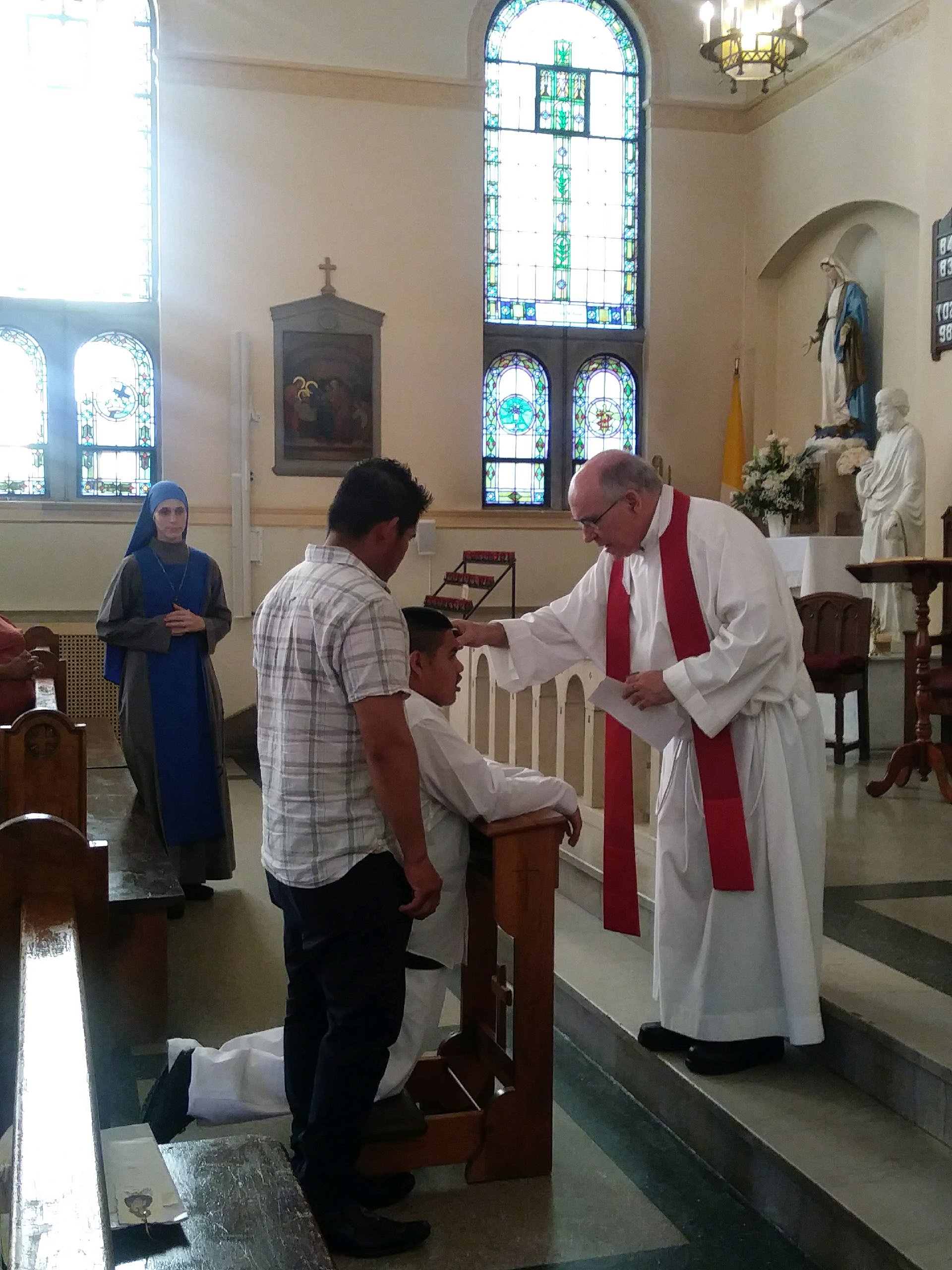