The Witchdoctor…that stole Heaven
I arrived to the mission, here in Tanzania, a month and a half ago and this time has really flown by. These have been weeks of getting to know new people, many activities and new apostolates, different ways of doing things and learning a new language that is completely different.

One of the things that is very different, and each time I think about it impresses me a lot, is the amount of parishioners we have and the territory that makes up our parish. This area is divided into many little villages, and each little village has a catechist (the one in charge of the catechesis and the liturgy of the word on Sundays) and its leaders (those who are in charge of the logistics of the community). Every Wednesday afternoon for apostolate we visit one of these little villages, called Lughela. The second Wednesday that I was here, I accompanied Sister Upendo to this little village. It took us one hour to arrive, walking along a beautiful path, a path that is generally done on foot or by bicycle. As we got closer to the little village, we met with children that accompanied us along the way.

We arrived, and the people began to congregate next to the house of a lady to pray the rosary. Then the following Sunday’s Gospel was read, some points on the Gospel were given and petitions for all were prayed. Then one of the leaders of the community gave some announcements and then we asked if there was someone sick that we could visit. After a few minutes they informed us that in the house of the woman that we were praying next to, there was a very sick man who wanted us to visit him.

We entered the house and we saw the man, very skinny, laying on a sofa. He spoke very softly, with a distant look, but he was very conscious of what was being said to him. His name was Charles.

Charles was from Shinyanga, a town much bigger than Ushetu, about three hours from there. When he was younger someone taught him how to pray, but as the years passed he met with bad friends and stopped praying. Among the bad things that he did with these friends was visiting the witchdoctors. After some time, he himself became a witchdoctor and started to live a bad life with women and his witchcraft, abandoning God completely. At one point, he came to know a woman who was Catholic and had the custom of praying. He moved with her to the Little village of Lughela and they had a son. This was the house of the woman where we prayed the rosary this Wednesday in particular.

They invited us to sit down and Sister Upendo began talking to Him about God, the God who created us and who created us for Him. She spoke to him about our dependence on God, His Providence and that we cannot do anything without Him. She asked him if he was baptized and he said no, but that many of his family members were baptized. She asked him if he wanted to be baptized and he said yes. She spoke to him about the Sacrament of Baptism and the necessity of a change of life, to leave the old life of sin behind. She asked him if he prayed and he said yes. Sister then told him that he needs to ask for the grace to die as a child of God. At the end of our visit, we prayed with Charles and as we were saying good-bye, he asked us that we pray much for him. We told the woman that if Charles gets worse, she should call the leaders of the village. When we came out of the house, we also told the leaders that they should ask the Catechist to come visit Charles.

Five days later, Charles’ health became worse and the woman went to the houses of the leaders asking them if they could come pray with him. They notified Filipo, the Catechist. First the leaders arrived and prayed with Charles. He asked them to pray a lot for him. They noticed him very agitated and moving around in his bed. Then Filipo arrived, who, seeing the state of Charles, asked him if he wanted to be baptized. He said yes. Filipo asked him if he got better, was he willing to change his life and stop doing what he did before, especially the witchcraft. He said yes that he was willing. Filipo began to pray the Rite of Baptism. During the liturgy, the leaders were amazed how Charles was calming down and not moving like before. The Baptism finished and in less than five minutes, Charles died.

When the leaders were telling us about the baptism and death of Charles, all I could think of was how this witchdoctor stole heaven, like the good thief.
“Do you not fear God, since you are under the same sentence of condemnation? And we indeed justly; for we are receiving the due reward of our deeds; but this man has done nothing wrong.” (Luke 23: 40-41)

In his book “The Seven Last Words and Seven Virtues”, Venerable Fulton Sheen writes about the Good Thief that, “The fear of God of which this robber spoke was not a servile fear that God would punish them for their thefts; it was rather a filial fear based on reverence – a fear of displeasing Him who had done nothing to deserve such a humiliating death. As we study the Good Thief, we see that his fear led to faith, for ‘The fear of the Lord…is wisdom’ (Job 28:28). In a single moment a soul with a genuine fear of God can come to a greater understanding of the purpose of life than in a life-time spent in the study of the ephemeral philosophies of men.”

During his sickness, we can think that Charles experienced this fear. Maybe God gave him the grace to have this time lying in bed to think and examine his life, on how he lived and how God will judge him when he sees him face to face. Maybe this is what moved him to repent of all that he had done and I imagine that this is why he was asking us and the leaders to pray a lot for him.

“Jesus, remember me when you come into your kingdom” (Luke 23:42).
Fulton Sheen continues, “The thief had faith in the Son of God; now he could hope. And that hope born of fear and faith received its immediate response: “This day thou shalt be with me in paradise” (Luke 23:43). Above the blasphemous raucous background of others shouting “Himself He cannot save”, he heard: “This Day”.

Charles experienced this faith and therefore this hope in God. With the prayers and help of the Christians around him, Charles was able to receive what he was hoping for, Baptism, to be a Child of God, and we hope that when he died, he found the God who created Him and loved him from all eternity. “Charles, I baptize you in the name of the Father, and of the Son, and of the Holy Spirit” … “Today you will be with me in Paradise.”

We ask Our Lady of Evangelization for the grace to be obedient instruments in the hands of God and docile to the Holy Spirit, to proclaim His Word and His Truth how and when he wants for the salvation of souls.

M. Mary Our Lady of the Blessed Sacrament 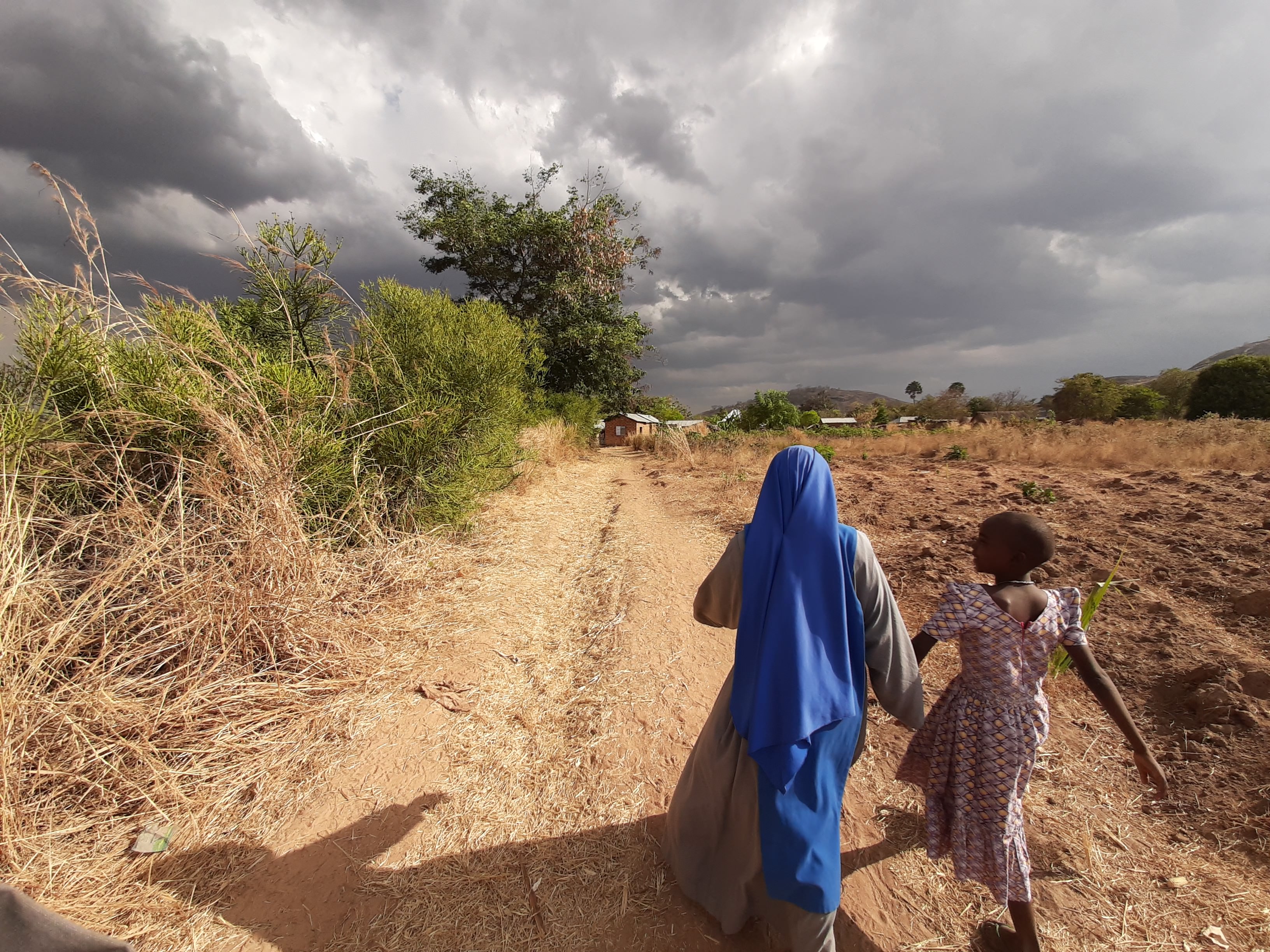 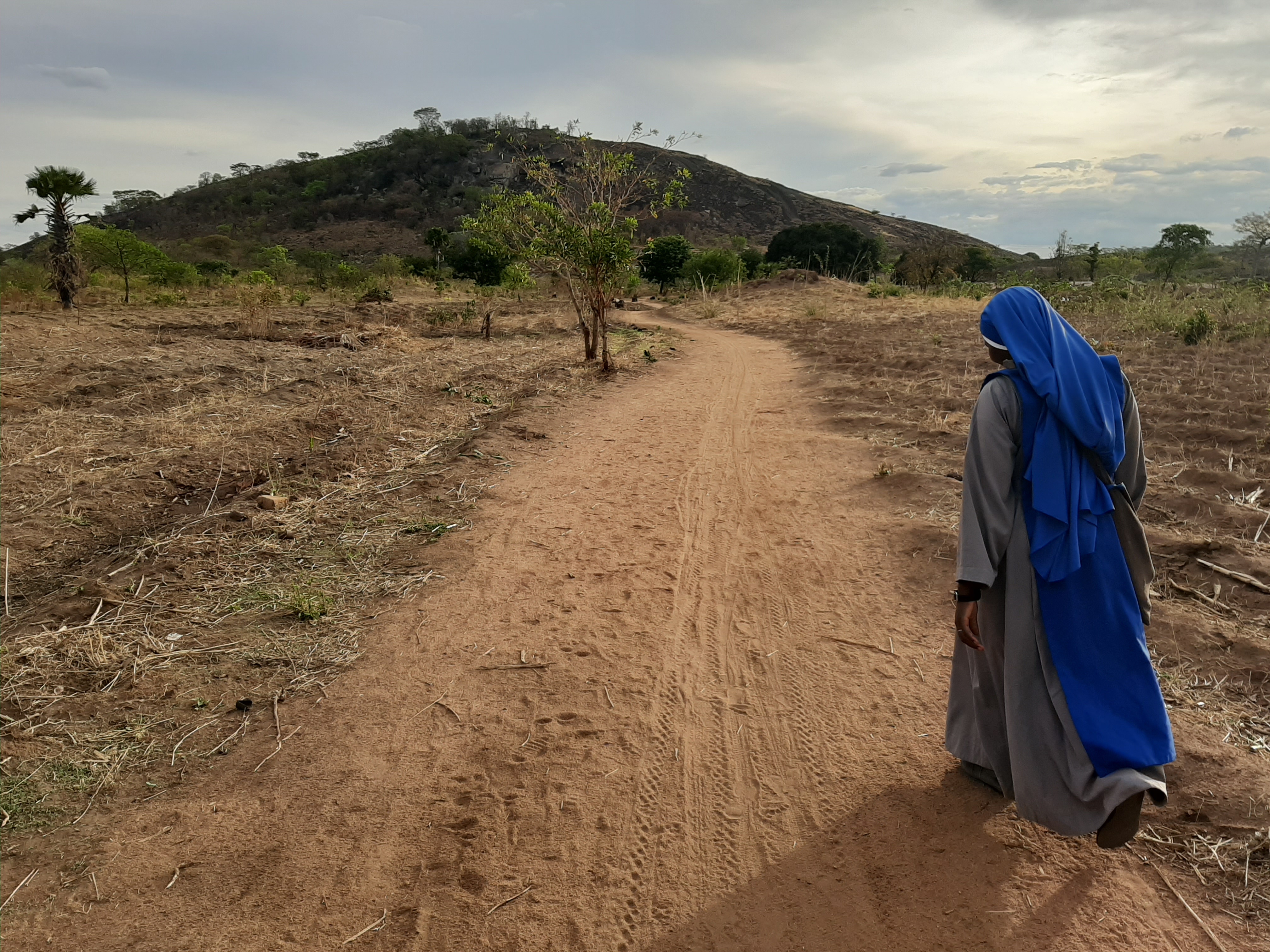 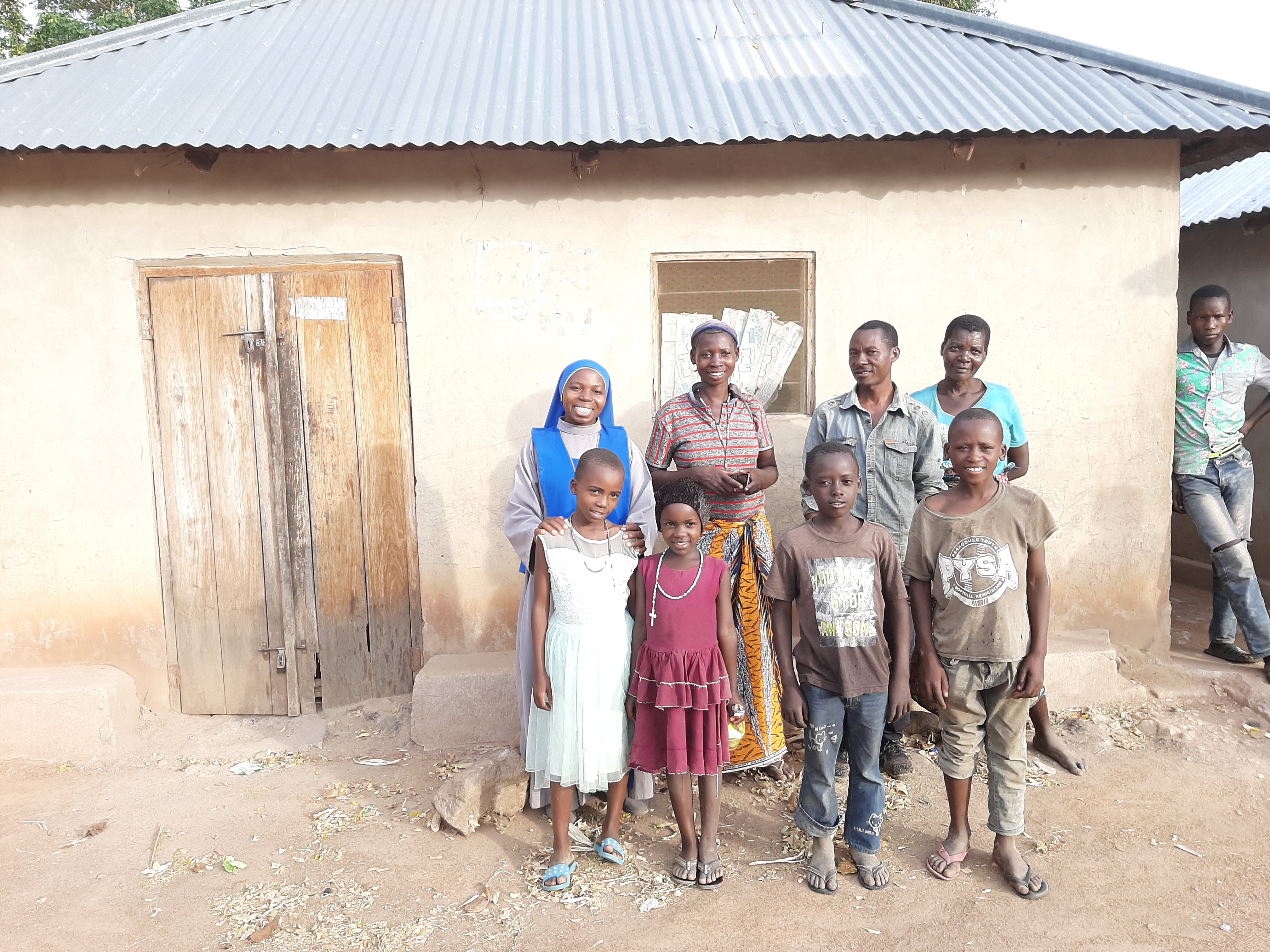 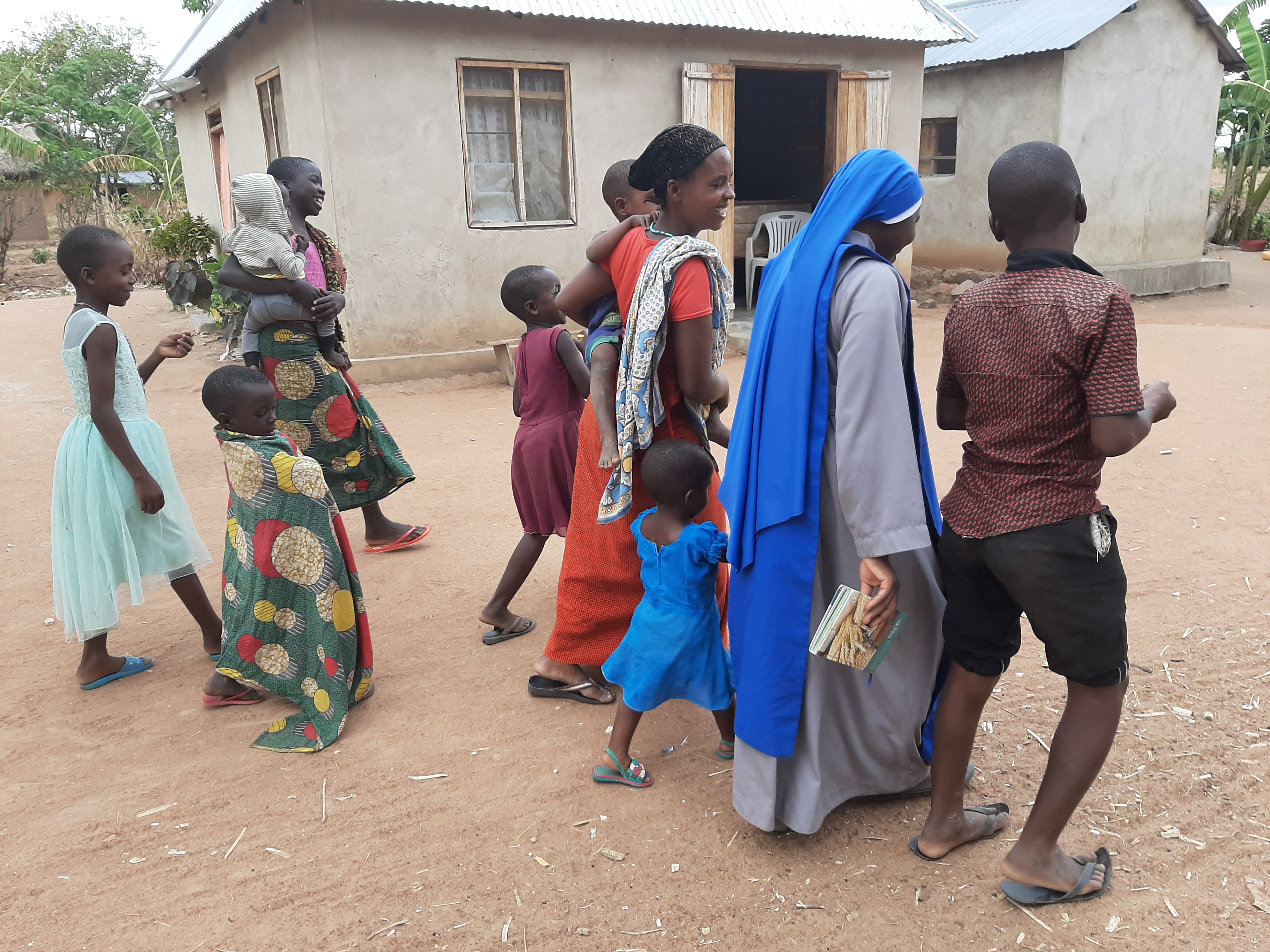 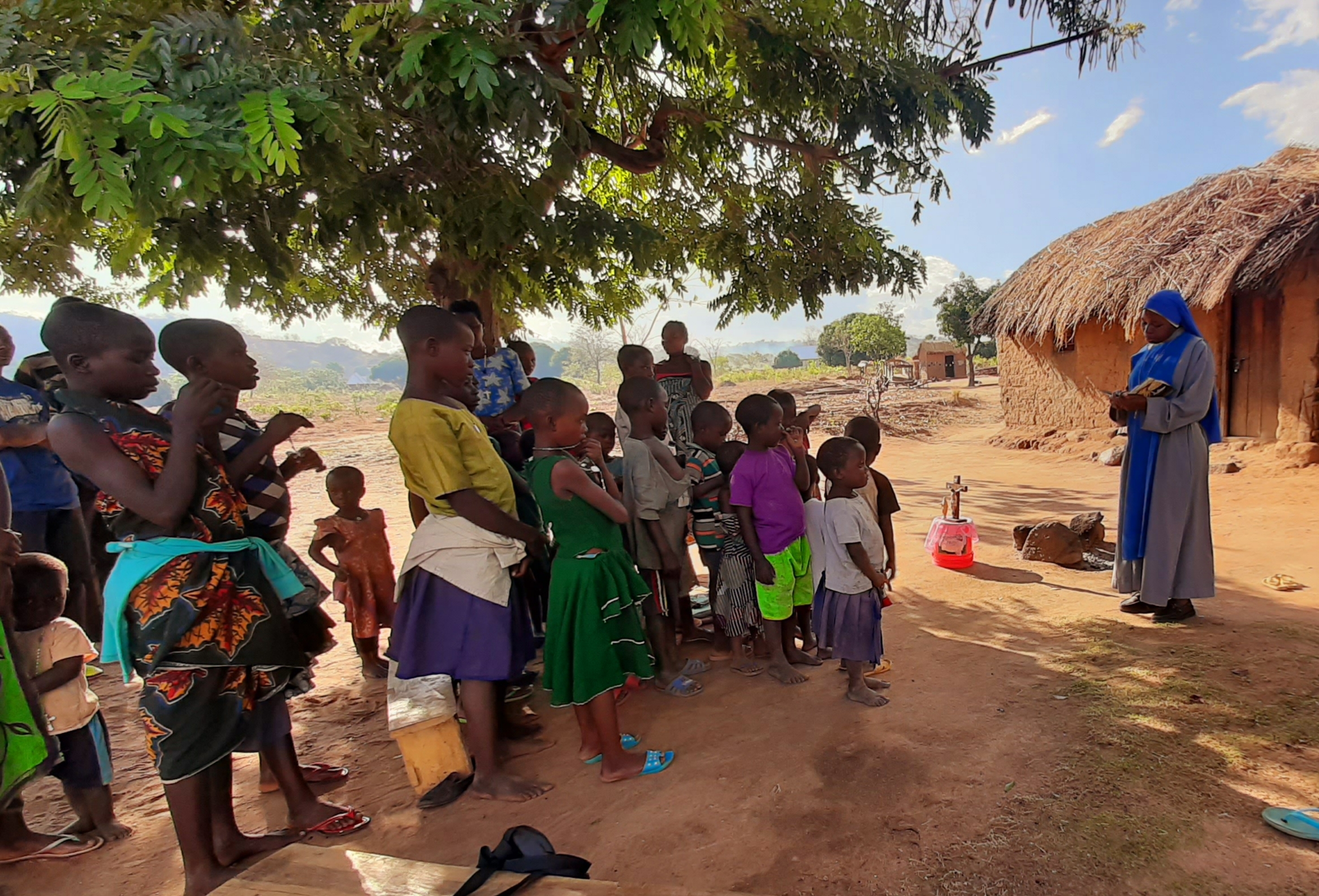