“Scattering a thousand graces, he passed”

I was able to visit our mission in Tanzania one more time. The place is incredible. The title of this chronicle seems to be the best way to sum up what one experiences when visiting these blessed lands.

“Scattering a thousand graces, he passed through these groves in haste, and looking upon them as he went, left them, by his glance alone, clothed with his beauty”; in such a magnificent manner, St. John of the Cross expresses how the soul is left when the Lord passes by. This is what one experiences in Tanzania; but even more, one experiences that the Lord has passed by “recently”. The freshness of everything here speaks to us of Him, of his creative power, of his redemptive work, of his sanctification.

We know that, in the beginning, God created the heavens and the earth, and that he put innumerable beings in it, even as he created man and woman, Adam and Eve. We know that by an act free will those two cast God out of their souls and, consequently, the world was left in darkness- in the darkness of sin and of all that sin brought with it: ignorance, disordered passions, human enmity, the sterile lands, suffering, sickness, death… With the original sin of man and woman, and in them all of Humanity who would come from their loins, the state of original justice was lost and the earthly paradise was lost.

We know very well that God promised a Redeemer and that He fulfilled his word, to such a point that in the state of Redemption, the new Creation surpassed and surpasses the original state, by the merits of Christ.

Then, just as, on the one hand, the reality of sin and its consequences can be verified with greater evidence -it suffices just to read the headlines in the news to substantiate this-, on the other hand, the power of the grace of Christ is more visible when human docility receives it with love and fidelity. This is largely what makes Tanzania a “paradise”. Moreover, almost so as to manifest the Divine goodness that “makes all things new”, the Lord desired that in those places nature itself would be maintained by the Hand of the Creator, in a way so patently clear, that one cannot fail to be moved and to praise the Lord for all of Creation.

Here it is easier than in other places to recognize God in creation. As St. Paul teaches: the invisible things of God are known through the things he has made (cf. Rom 1:20). How beautiful must God be if his works are so beautiful! St. Ignatius also teaches that one must discover God acting in his works, God who ordains that all things work for our sustenance, and -above all else- to manifest His Glory (cf. Contemplation to attain love). How Good, Provident, Wise and Powerful is God who works in every being, in the multitude of their natures, in such a harmonious, constant and ordered way!

This then, for distinct reasons, is a “paradise”. I do not mean to say that there is not death or signs of death. All the inhabitants here are also descendants of Adam and Eve after original sin! But it is a privileged place and, to make what am trying to say better understood, I will describe some of the realities that are experienced here.

In the order of grace, one knows that innocence and rectitude, docility, true joy, humility, fidelity to one’s word, among other things, are unequivocal signs of the action of God. Thus, in those who have embraced the love of God manifest in Jesus Christ, their innocence of life and the purity that carries them along is evident. The Catholics are not a majority, but they are increasing across Tanzania, taking giant steps, and the new life in Christ transforms them. The docility which many pagans (mostly animists), and some Protestants and Muslims show toward the Catholic faith is simply moving. They ask to receive Christ- and those who convert do so with such fervor that it is contagious for many others.

It is edifying to see how, among the villages, they debate over who can have a chapel, and who is able to have the Holy Mass -one of the costliest of graces- even only once a month… or once a year!

The humility of the faithful people of Tanzania, their faithfulness to Christ before the Mystery of God, the joy of their faith, their strength in persevering in a world where the majority do not believe in God nor in His Christ… these are things which speak of the “passing” of God here.

The world of God’s Grace, infinitely more beautiful and better than the physical world, is full of good fruits in these lands.

What is seen? What makes this mission so special? For a few years now, I have seen and thought about what the mark of distinction is, and, definitively, I cannot find any response other than the spiritual “world”, the atmosphere of faith, which one breathes in this mission, enables the discovery of God in every corner, if one is open to see it.

True signs of God’s presence in this spiritual “paradise” are proven in their learning of the Faith, in its conservation and transmission; in the worthy celebration of the sacred Mysteries; in the propagation of the Faith with true zeal; in the number of conversions and vocations; in the true devotion to the Blessed Virgin Mary; in the spirit of constant adoration and praise; in the love of family and in the fidelity and fecundity of marriage (the defense of all human life: the elderly-who are not abandoned!-, the unborn boys and girls-who are not killed for any reason!-, the sick-who are received and accompanied no matter how grave the situation may be!-); in the spirit of sacrifice as a pleasing oblation to God; etc.

One might think that I exaggerate, but I can assure you that all of this is easy to prove here. Our mission here is enormous. It has a territory of 2,400 square kilometers (925 square miles) –twelve times larger than the city of Buenos Aires! 80,000 persons live here. The half of which are Catholic. There are 53 villages within the parish, and every village in turn is responsible for some other community. In total, there are more than 120 communities.
Those registered to receive the sacraments of Christian initiation this year, although the list is not even official yet, are 3,800. Yes, three thousand eight hundred!

To this are added the groups of the various villages and communities: Altar boys, children of Mary, the group of the Sacred Heart of Jesus, the Legionaries of Mary, Catechists–true pillars in the evangelization! –, the choirs, camps, etc., etc… thousands of souls participate in the activities. Moreover, just as it is a sacrifice for the missionaries to reach some villages, so too is it a sacrifice for the souls to reach their centers: sometimes they walk for hours in order to Adore the Blessed Sacrament or to attend a youth meeting!

This all marches forward with the members of our Religious Family of the Incarnate Word’s great sacrifice and enthusiasm- 4 priests, 4 religious, and the postulants of both institutes. It is an enormous task.

And, precisely in this, the ‘freshness’ of the Lord’s “passing” is seen. There is a lot of pastoral and religious enthusiasm. However, it is not an emotional enthusiasm which might end after the first day of a popular mission; rather, it is an enthusiasm which makes them pray well. They rise at 5am and have Adoration of the Blessed Sacrament from 5:30 until 6:30am, then the Rosary with the faithful, who not infrequently fill the church. At this hour! Then, the Holy Mass followed by Morning Prayer. A small breakfast, and… off to work! They stop for a little while, when it is possible, at midday, to have lunch as a community and a short rest. In the afternoon, the work continues. At sunset, they return to the chapel at their home, dinner is prepared, and there is a merited eutrapelia (community recreation).

All of our missionaries seem to be very well. I thank them in this chronicle for receiving me, and for the good example that they give us in how they bear the folly of the Cross of Christ, with great joy and fidelity, among the peoples.

In the entire parish, there is not one meter of asphalt; there is no running water, no electric lines. All is done by hand. And, our religious not only have to think about their livelihood, but they also are carrying out works for their people and for all the inhabitants of the place: the hospital-clinic of the sisters, the primary school, the attention to the poor, the very expensive digging of water wells, the construction of schools, the houses of formation, missionary centers, etc. etc. These are the needs of the day.

To travel from one village to another could take you more than an hour. Some are about 40km down the road… the roads… they are called roads but they bear only the name. Your ribs only fall in place because God joined them well to your spine!

Where they travel to, if there is a chapel they meet there, if not, under a tree. And if there is not even a tree, then they meet wherever the missionary arrived. But, if no missionary goes there… they meet nonetheless!

Some will think (we have Heard) that the people are this way because they don’t have anything. What ignorance, and likewise what malice to think or say such! They are poor, thanks to God, but they lack nothing!

Many have their plot of land, their small livestock, their crops, they live in the best hotel in the world – better than those in natural reserves! -, where nature is very beautiful, and they are full of joy and the desire to live. Blessed are the poor, who, with their humble, innocent eyes, and their realism, teach us to discover the essential: the passing of the Lord! They are the ones, the people here, reborn in Grace, and their good missionaries, who teach us to see the Presence of God in everything, to consider that good always triumphs over evil, and not to let oneself be overcome by discouragement or by the sadness of this foolish and evil world. They teach us at the same time to work for the Kingdom of Christ, for the healthy development of peoples, and above all, to rejoice and dance for joy before the Lord.

“Scattering a thousand graces, he passed through these groves in haste, and looking upon them as he went, left them, clothed with his beauty”!

Thank you Tanzania and your missionaries! You are a precious pearl in the crown of the Catholic Church and in our small Religious Family of the Incarnate Word. 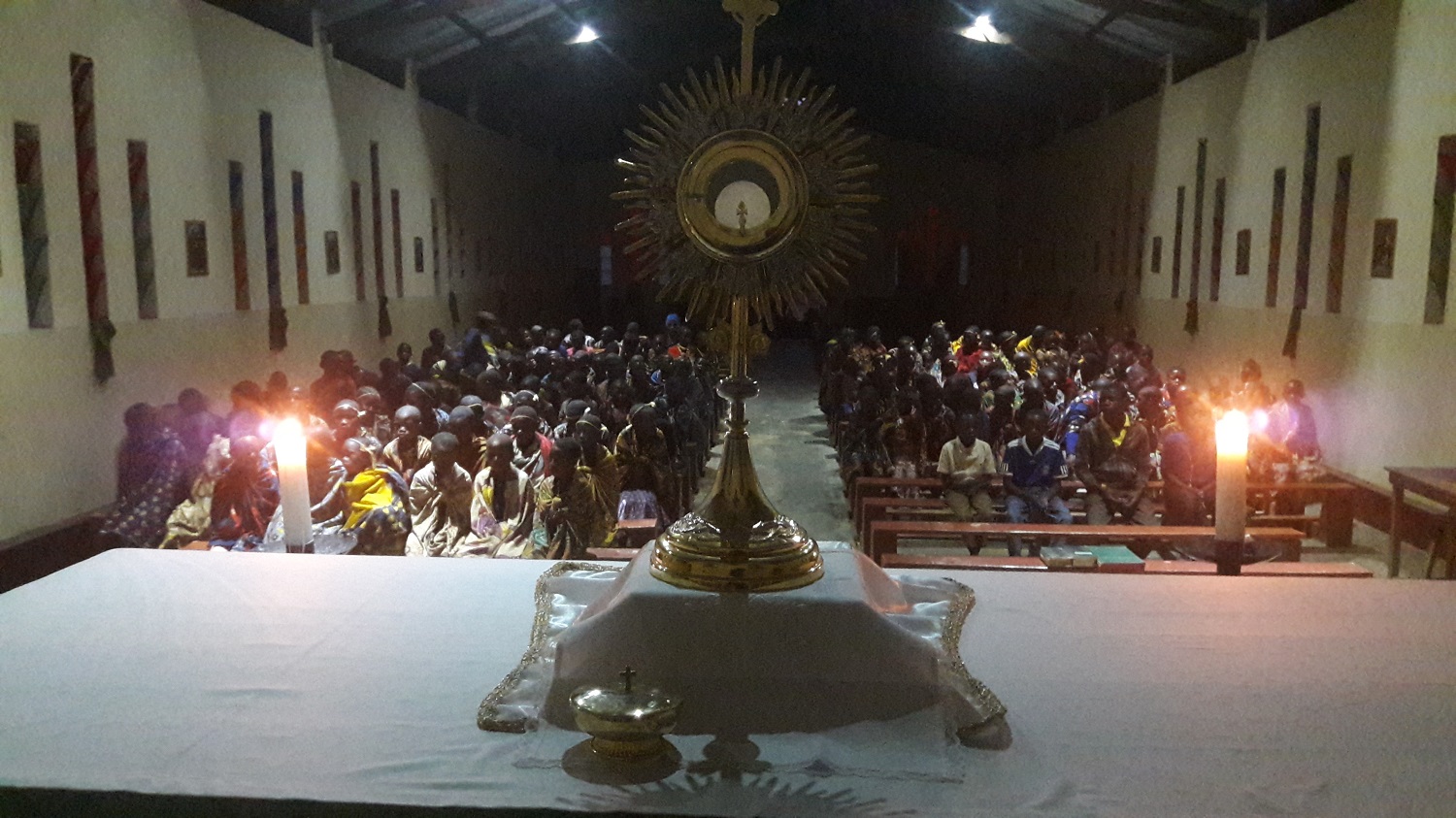 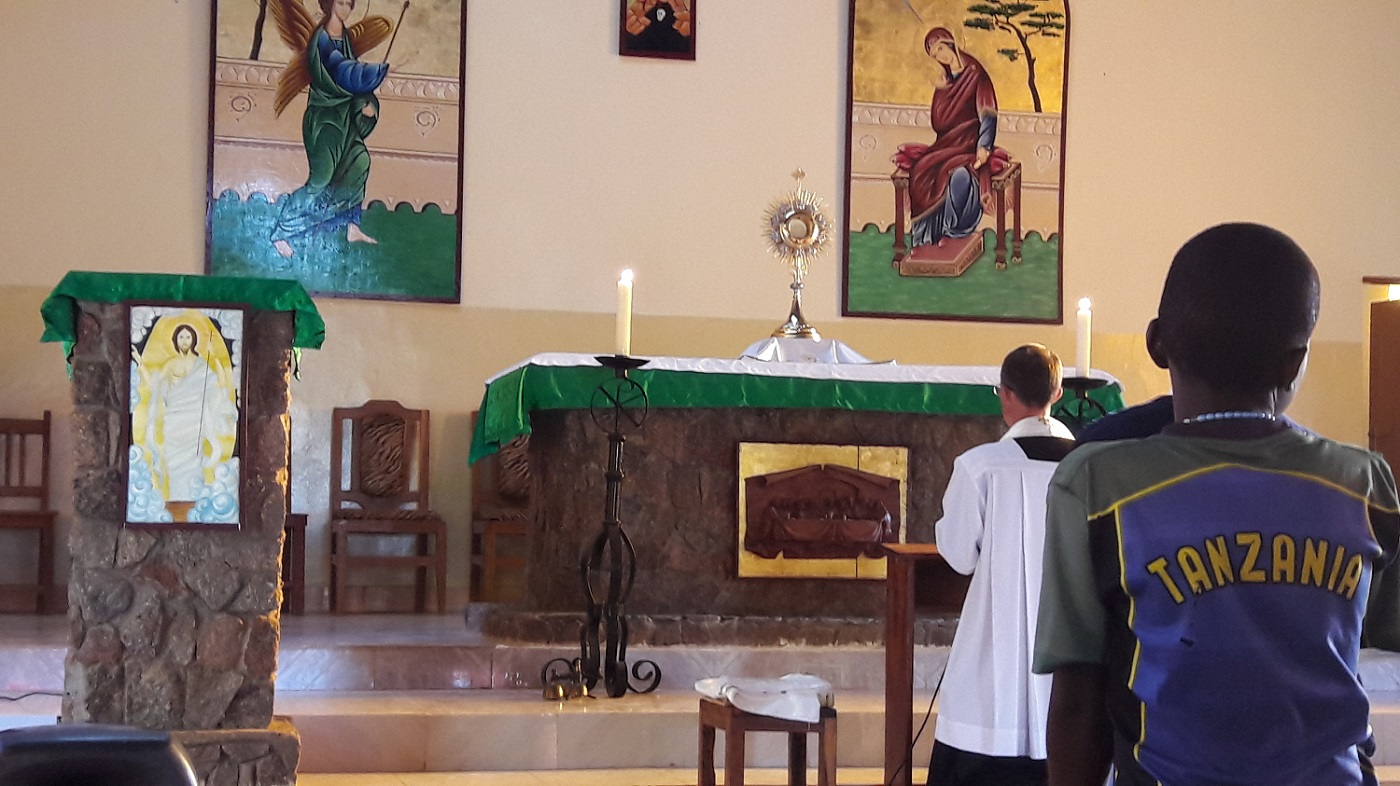 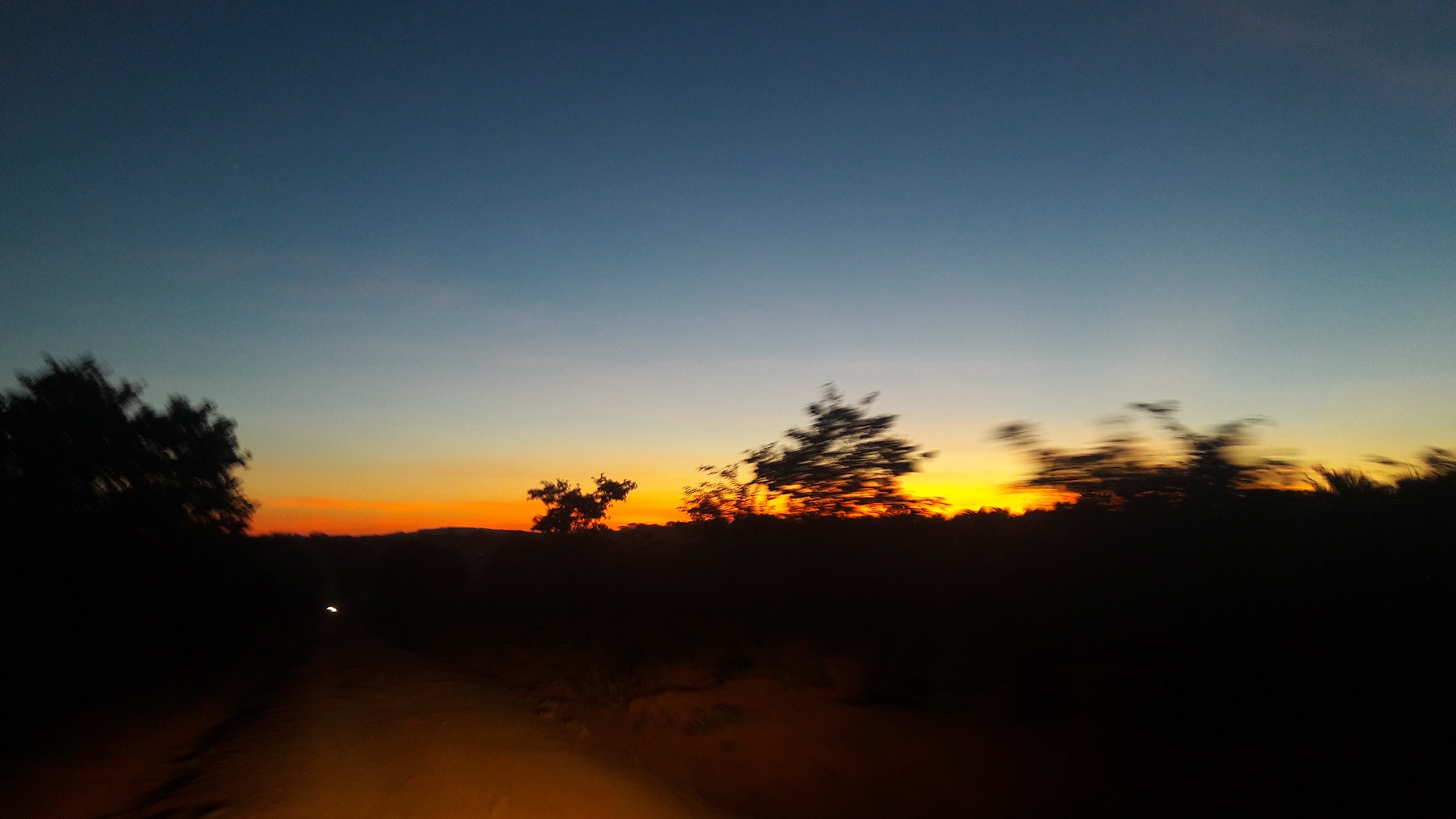 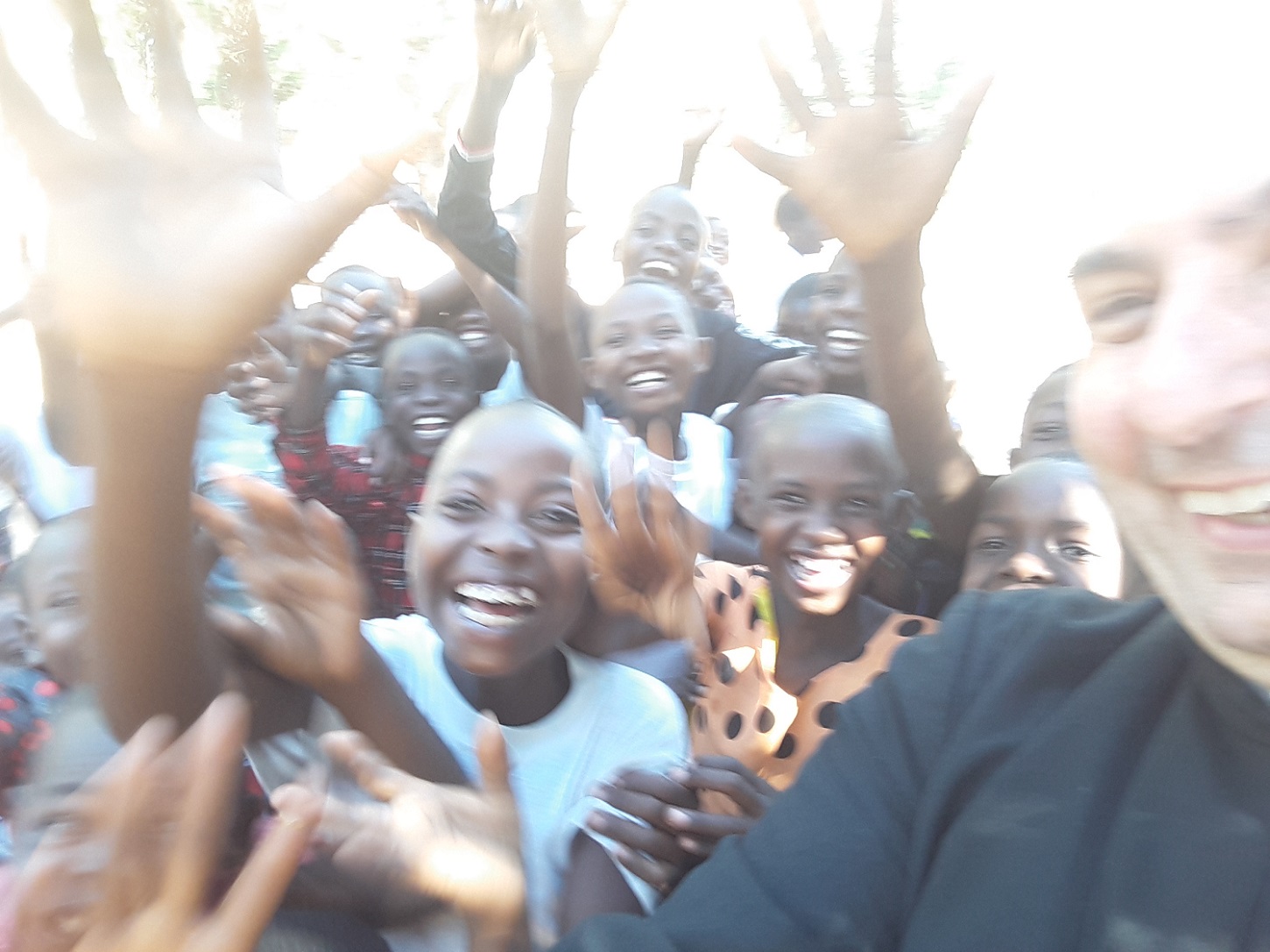 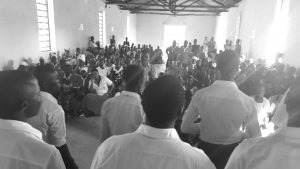 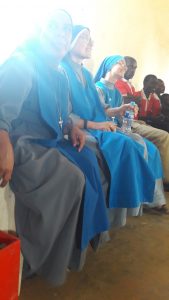 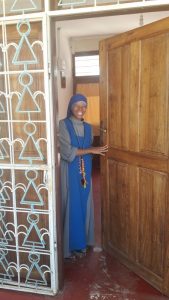 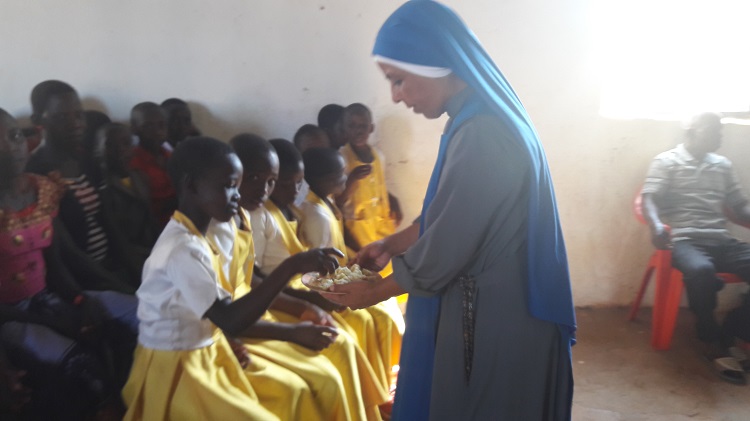 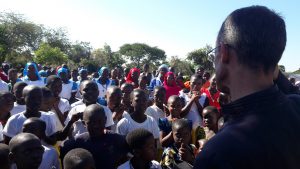 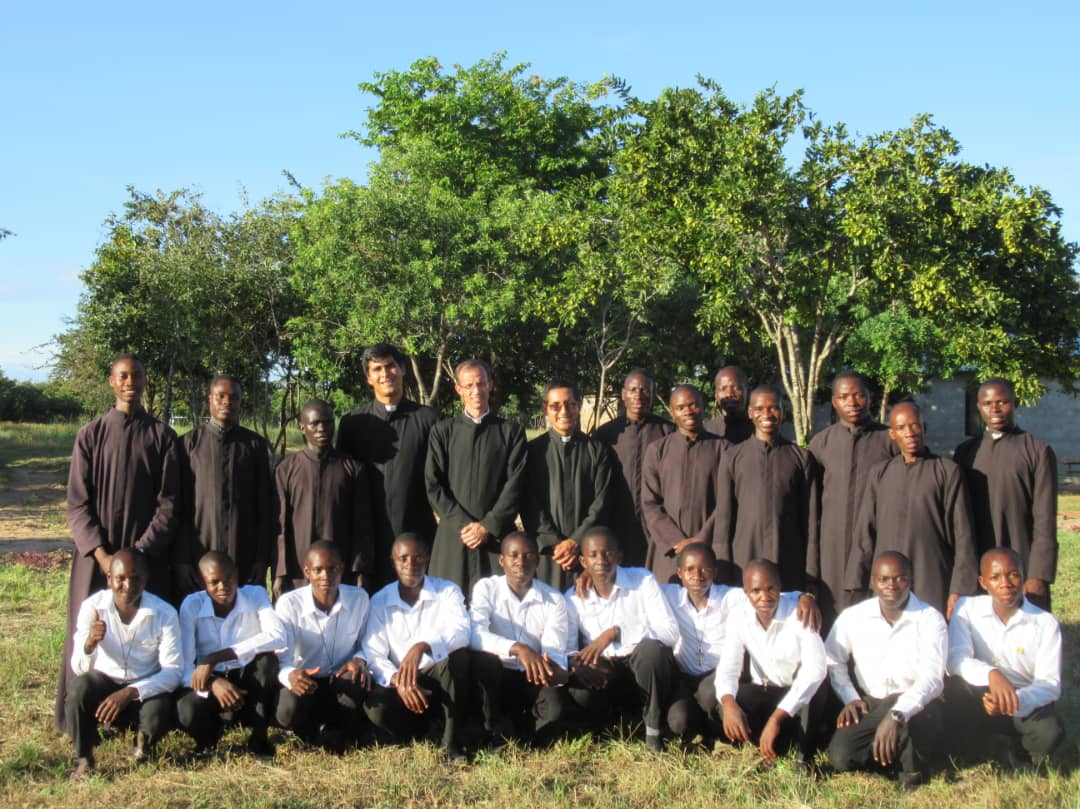