I want to be Baptized for Christmas (Dallas TX)

On January 1st, 2020, the Solemnity of Mary, Mother of God, we gave thanks for 6 months of mission in Dallas, Texas at St. Bernard’s school and parish community.

In the first weeks, we witnessed God’s providential care as every need was provided for. We arrived to a restored convent building, named after St. Joseph and already with statue of the Saint holding the Child Jesus placed in front to welcome us. We quickly witnessed His faithful care as every need was met, from simple things to bigger ones. We would mention something that was missing in the convent such as a pair of scissors, an iron, a toaster, and before the day ended, before asking anyone for help, it would be at our door.

We went to Texas knowing all the stereotypes, the cowboys, John Wayne, the wide west adventures, ‘y’all’ really being used in daily vocabulary, but we quickly learned that these were no stereotypes, but in fact authentic Texan culture! We found ourselves surrounded by true Texan southern hospitality, tex-mex food, authentic cowboy dress and true cowboy and Wild West adventure witnessed at the local Mesquite rodeo. Within our first days we witnessed a real cowboy, a look alike to John Wayne, walking into our local bank, as well as the longhorn cattle roundup at the historical Stockyards district where the cattle industry was born in Texas. We came to learn the influence of the first Spanish Catholic missionaries as they were the first to bring the Gospel message to this land. We quickly recognized the continued presence of a deep value for the family, faith, and patriotism that is very much still part of the Texan culture.

We arrived to teach full time at the small parochial school of St. Bernard’s. We were immersed into the joys, as well as the needs and challenges found within a school apostolate. We were able to witness to our call to be spouses of Christ and Mothers of souls through our daily presence amongst the school community. Playing with the students at recess, the countless opportunities of tying shoelaces and answering repeated questions, helping with lunches or zipping jackets, as well as encouraging the children to learn new things; all of these moments were small concrete experiences when our vows became true channels of God’s love to be shared with each one of these precious souls.

Long before our arrival, God already knew the souls he desired to touch through our new foundation here in Dallas, Texas, as well as the sacrifices and crosses that He had prepared for us. Since the Holy Spirit is the protagonist in every mission, we were challenged to deepen our trust that the work belongs to Him alone. God is at work and He gave us a glimpse of the fruits He desired to bring forth in only 6 months and despite our little experience and our limitations.

On December 20th, during the school Mass two students received for the first time God’s sanctifying grace through the sacrament of baptism. An 8th grade student, had expressed his desire for baptism before the sisters had arrived but was not ready to commit. This past October, when I happened upon a discussion about the sacrament of Baptism with some 8th graders, the question was asked- ‘What is keeping you from being baptized?’ This particular student again admitted his authentic desire for baptism, and when given the opportunity to set a date, he stated twice, ‘I want to be baptized for Christmas.’ Coming from a non-practicing Catholic home, he understood that this decision was his, and that he would need to be the one to follow through with it; a great challenge indeed for any 8th grade boy. After a few classes of preparation, he quickly chose St. Anthony as his baptismal saint and began to grasp the unmerited gift being offered to him. Days before the baptism, he would remind his classmates and teachers, that he was getting baptized. He even was on his best behavior as the big day approached! The day of the baptism the school witnessed the authentic joy of both students who received the Sacrament that day. It was a gift that the entire school community was able to offer to the Christ Child this Christmas. Our Lord now dwells within two more souls, two more Children of God and heirs of His Kingdom.

We give thanks for the grace to witness God’s work within our community here in Dallas, and we ask for a deepening in our fidelity to be true spouses of Christ and Mothers of souls. 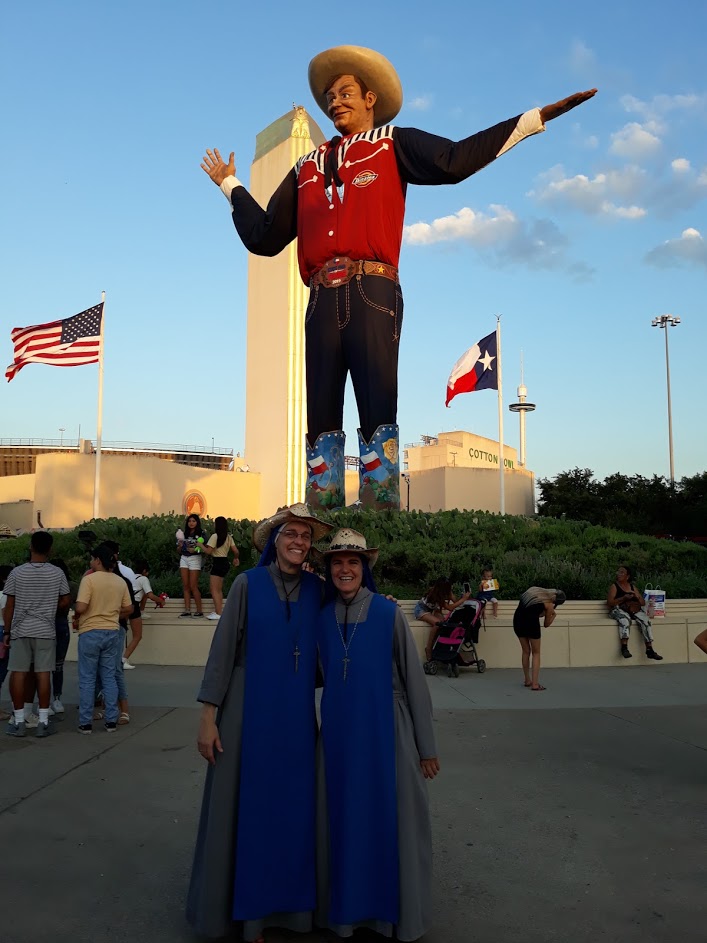 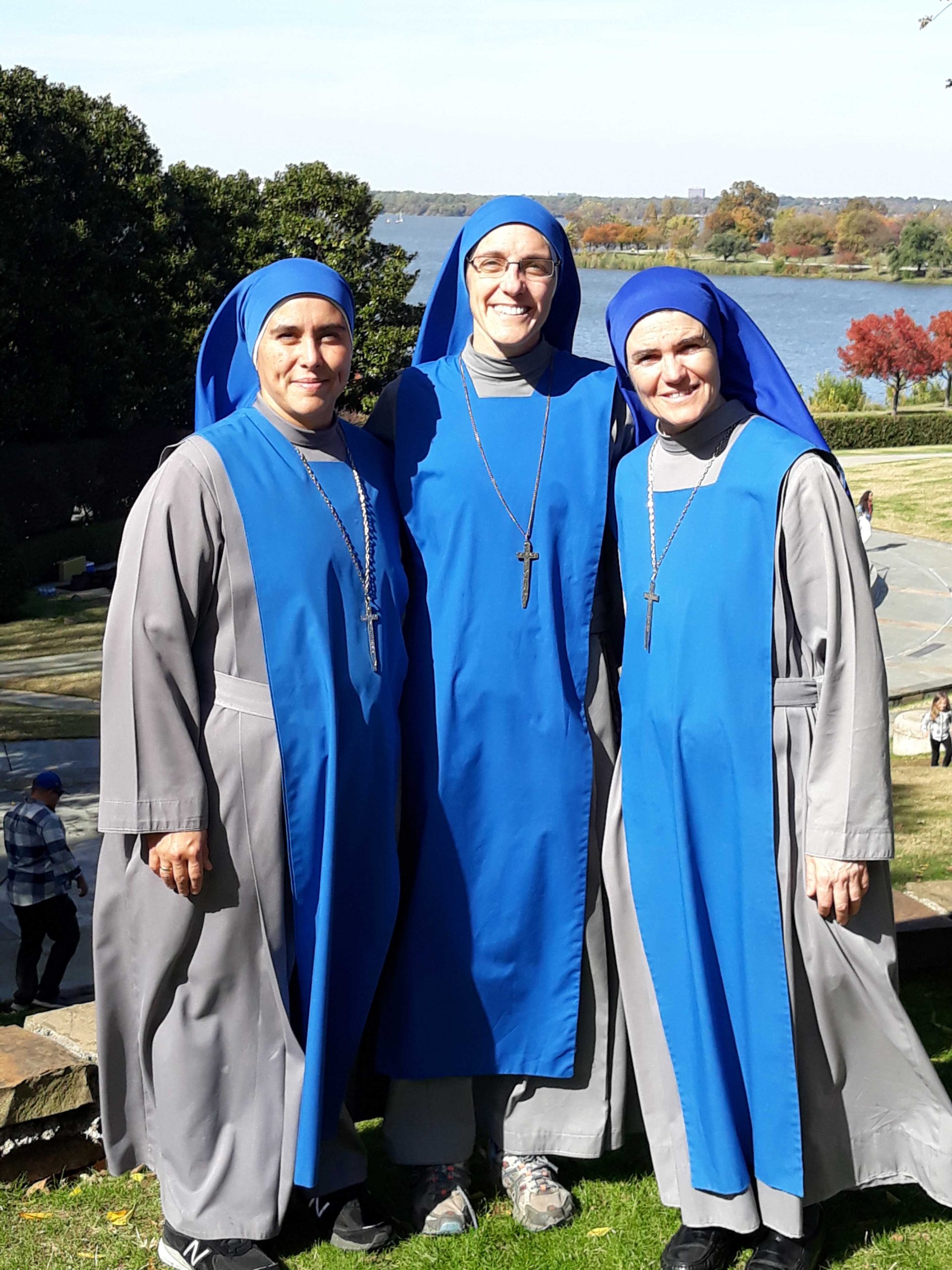 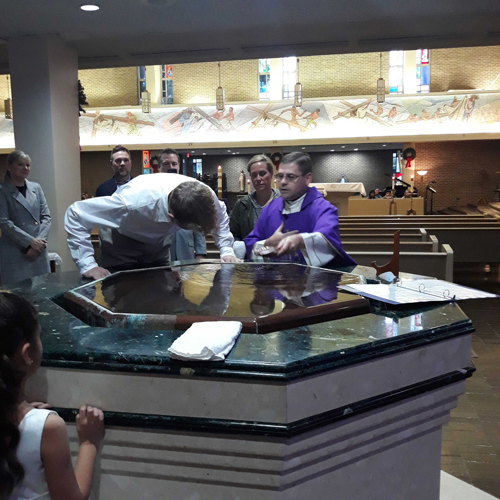 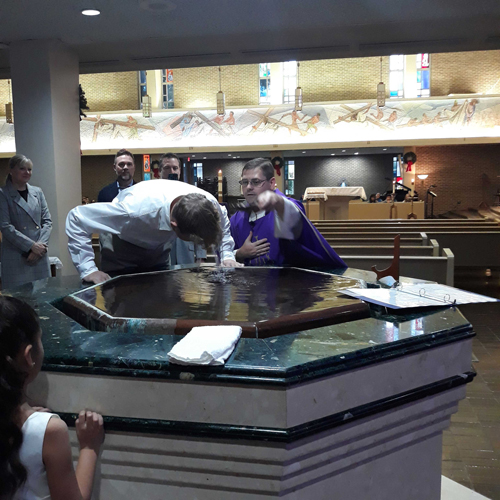