“The proper end of the missionary activity [of the Church] is the evangelization and foundation of the Church in the villages and groups in which is have not yet arrived.”
(Ad Gentes 6)

From Papua New Guinea we want to share the great news that there is now another chapel in the bush in which Jesus in the Blessed Sacrament can reign as King of Love and Salvation! Friday June 19, on the feast of the Sacred Heart, a new chapel was blessed in Watape, four hours from Holy Trinity Parish in the West Coast of Vanimo, PNG.

Watape is a village divided into two small communities with a total of about 1,000 people. The chapel in honor of the Sacred heart is located in the larger of the two villages. Not long ago, at the end of 2019, we visited this village for the first time. The Bishop entrusted this area of the bush to the care of the IVE Fathers because there was no priest caring for this area, although there were already 2 Catholic villages there. This new parish in the bush is under the patronage of St. Augustine, and the parish church is located in Maka Base Camp, which is a trip that takes 3 hours driving, about 120 kilometers from Vanimo. Thanks to a generous donation from Pope Francis, who we saw last year in Rome during the IVE Meeting, we were able to buy a 4×4 truck to go to the bush more frequently in order to better care for these souls entrusted to us. In this short time, we have been able to host a few popular missions other work with the local catechists. Going each time further into the bush, we see that the thirst for God is also greater! In some cases, the people had heard the Gospel, or parts of it, and would make a long trip to participate in some Christian service on the weekend. However, the majority of these villagers have still yet to hear the Word of God, and in the case of Watape village, there has never been any type of religious building. All of them had, at one point, heard of the Catholic Church, which they call “Mother Church.”

Many years ago, the Passionist missionaries founded a mission about 70 kilometers from Watape, and thanks to their work, there were 2 Catholic families that moved to this small village. These are the families that received us there. Their simple and humble faith, which has not been nourished by the Sacraments for many years, helped us to found the Catholic Church there. Father Martin, IVE, entrusted this small mission in Watape to the Sacred Heart, in order to honor Him and to ask for the grace of the conversion of many hearts to become temples for Him to reign. On this journey of evangelization, many obstacles appeared, and it seemed like the work would not be able to be completed. As the Gospel says, we thought we would have to “shake the dust from our feet” (Mt 10:14) and move on to another area. So it seemed until one night, one of the 2 catholic families invited Father to their house. Father left them a statue of the Sacred Heart, so that He could prepare the hearts of those in the village. Soon after, the first Mass was celebrated in this village, and each month they were able to have a Mass, although it was held in a very rudimentary structure. Later, there was catechist who was willing to live among the people to teach them the faith. Little by little, the Catholic community grew and the chapel was built.

Now, the people who not long ago had not heard the Word of God, are beginning to learn and live the true faith of the Catholic Church. They are building a house for the catechist and there is a group of lay missionaries from our parish on the Coast who are taking turns doing the great missionary work of bringing the Gospel to the bush, along with catechists from surrounding villages. These missionaries are like the hands and feet of the parish priests who go where he cannot due to time restraints. They generously give their time, leaving their families behind for a week at a time, to courageously bring the Gospel to their fellow countrymen in the bush, who don’t even know the sign of the cross. In God’s great Providence, the missionaries were accepted with great generosity and the people who received them also provided for all their needs: they welcomed them into their home, fed them, and opened their hearts and lives to the message of the Gospel.

On the day of the Feast of the Sacred Heart, we arrived to the entrance of the village at 11am, and we were welcomed with a typical ceremony from that village. In the ceremony, the people sang and played the Kundu, a drum, while they danced with their traditional dress, which consist in a skirt made of colorful grass and leaves, shell necklaces, and a headdress made of feathers. In their hands they shook feathers and different colored leaves. They processed like this all the way through the village to the entrance of the new chapel. The whole village was decorated with palm leaves and flowers, in a very natural and yet elegant way. Thus, we arrived to the new chapel for the blessing and Holy Mass. The people very piously followed the Mass with great devotion, although the prayers are new for the majority of them. It was very impressive to see how the people brought different types of gifts for the offering. Some brought money, like in all parts of the world, but others brought something more valuable to them, like fruits, vegetables, and food, which are the fruit of their time, land, and work. After the Holy Mass, the festivities began, complete with songs, dances, speeches, and plenty of food to share with everyone. The missionaries also brought some small gifts- holy cards of Our Lady and the saints along with candy, which brought great joy to the children and families present. After a festive time together, the sisters said goodbye and returned to Maka Base Camp, to bring a sick child to the local clinic. At this stop, we realized that part of the truck was broken, and the driver told us that it wasn’t possible to continue the trip back to town. Therefore, we had to wait there and look for a solution to the problem. We decided to walk around and pray the Rosary, and we were quickly joined by 2 girls from the village. We walked and waited until another car finally came, and we were able to complete our trip to Vanimo, arriving home around midnight.

We give thanks to God for a day full of numerous joys and graces, especially the grace to have another chapel in the bush that was dedicated on the day of its patron- the Sacred Heart. May the Sacred heart continue to model our hearts after His and reign forever!

In Jesus and Mary,
The Missionaries of the Incarnate Word in PNG 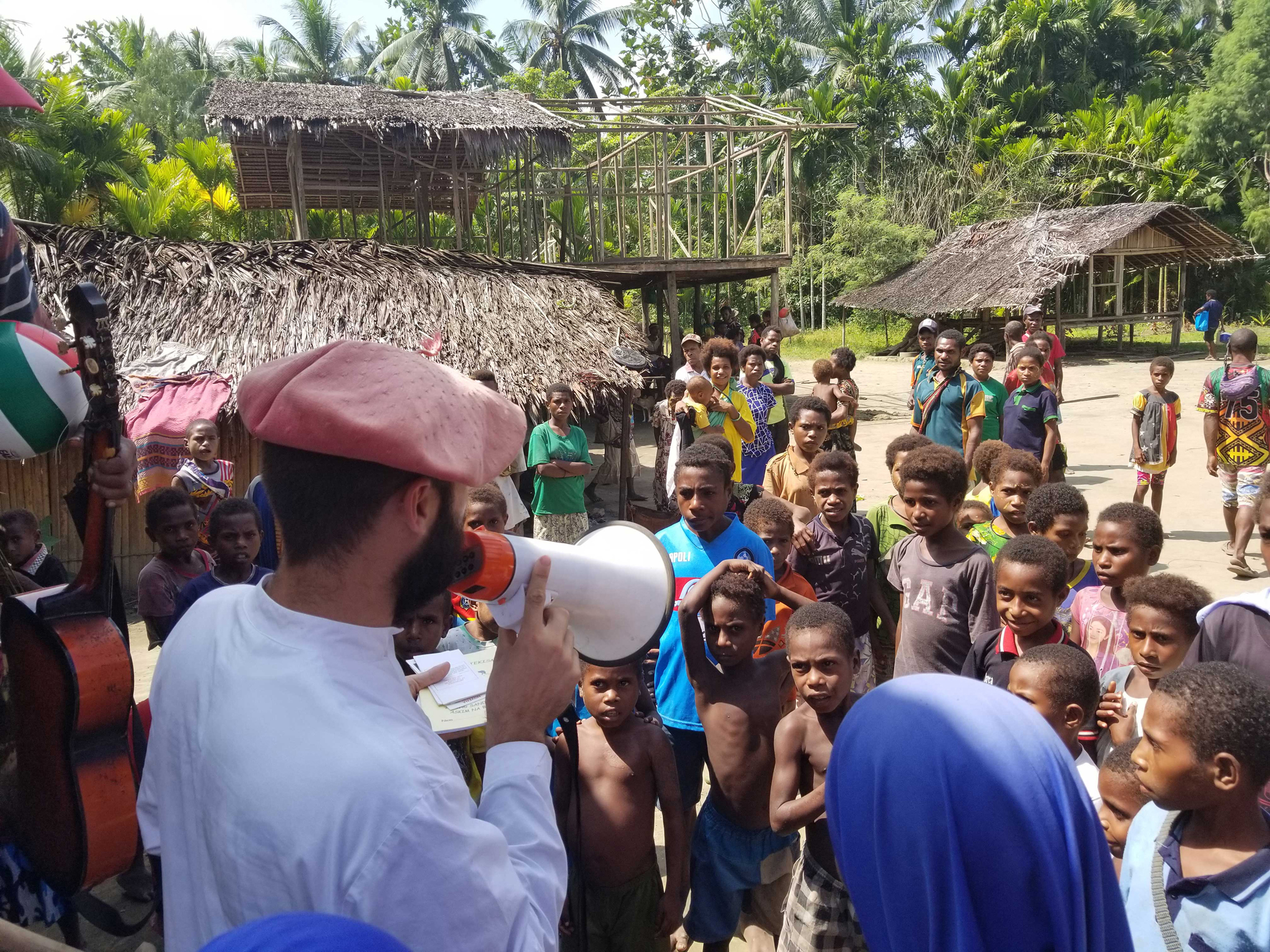 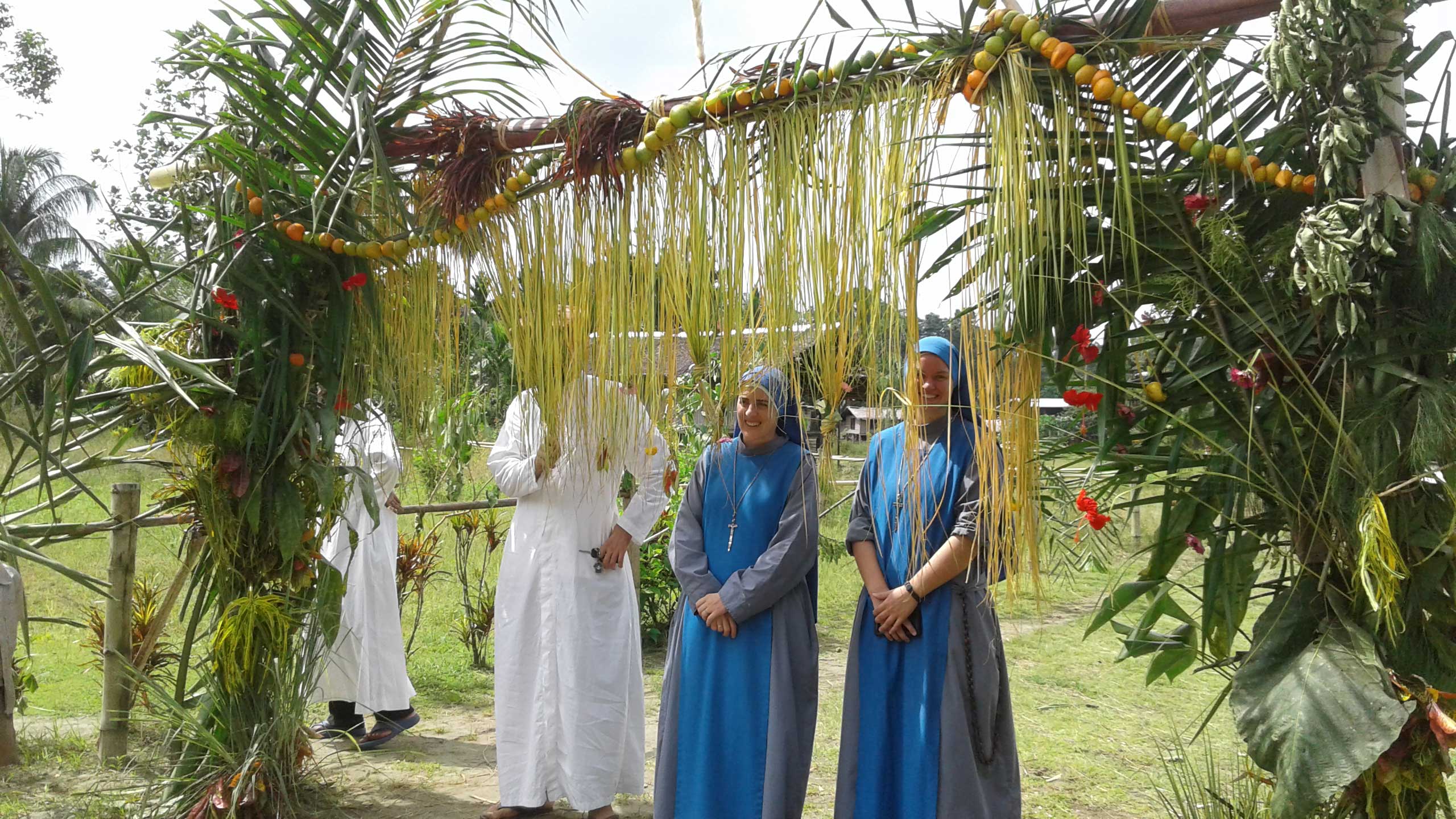 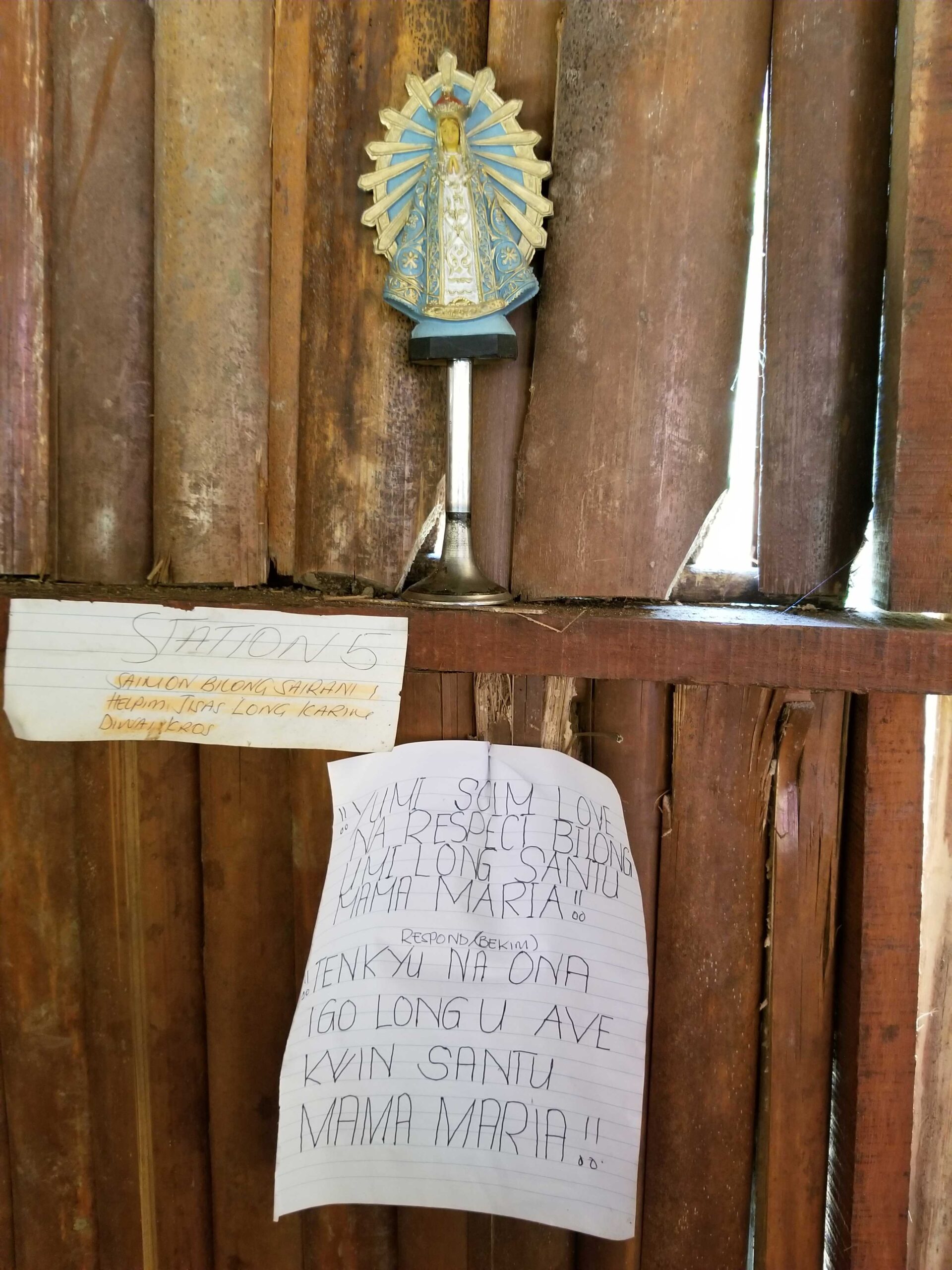 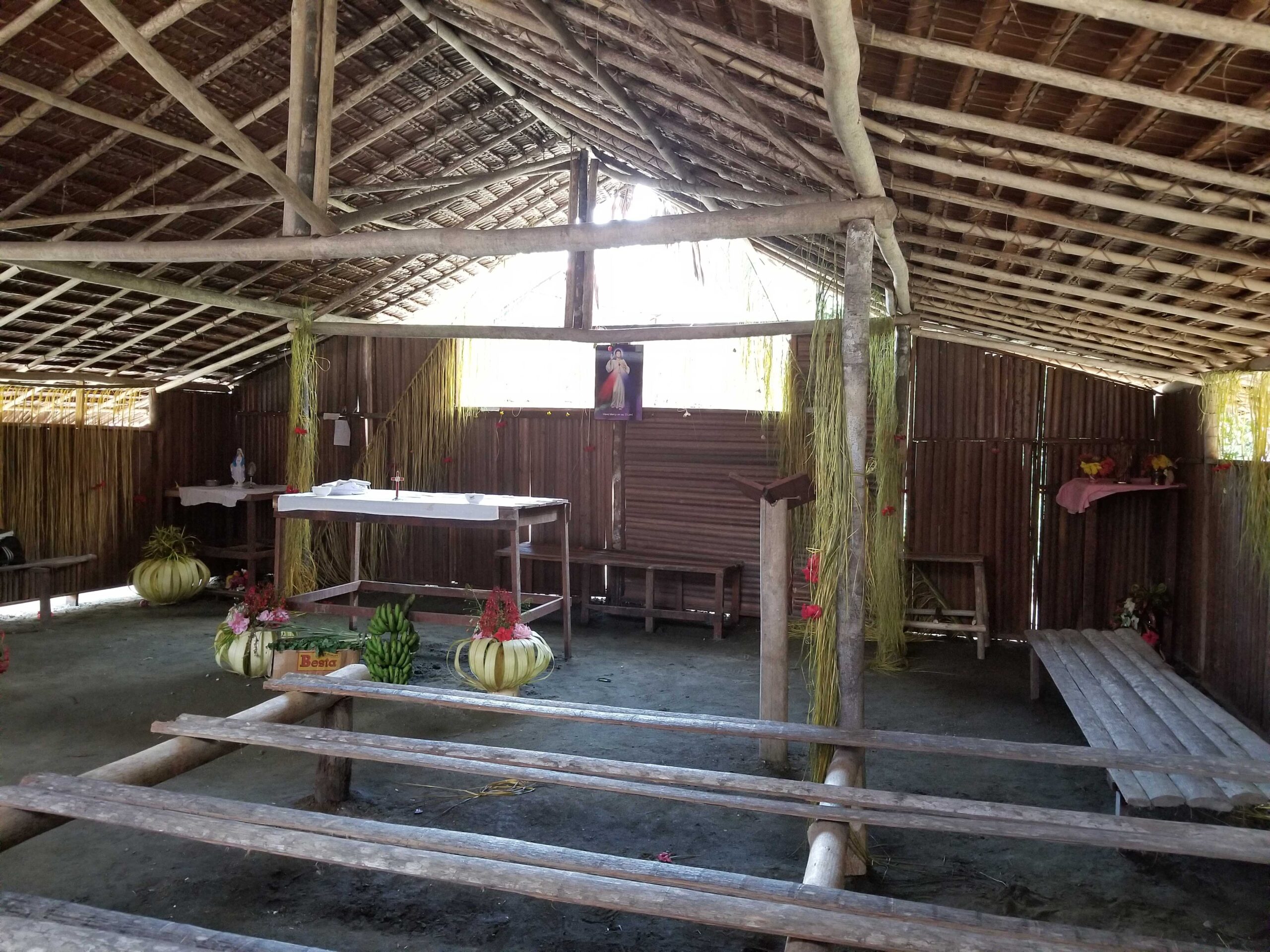 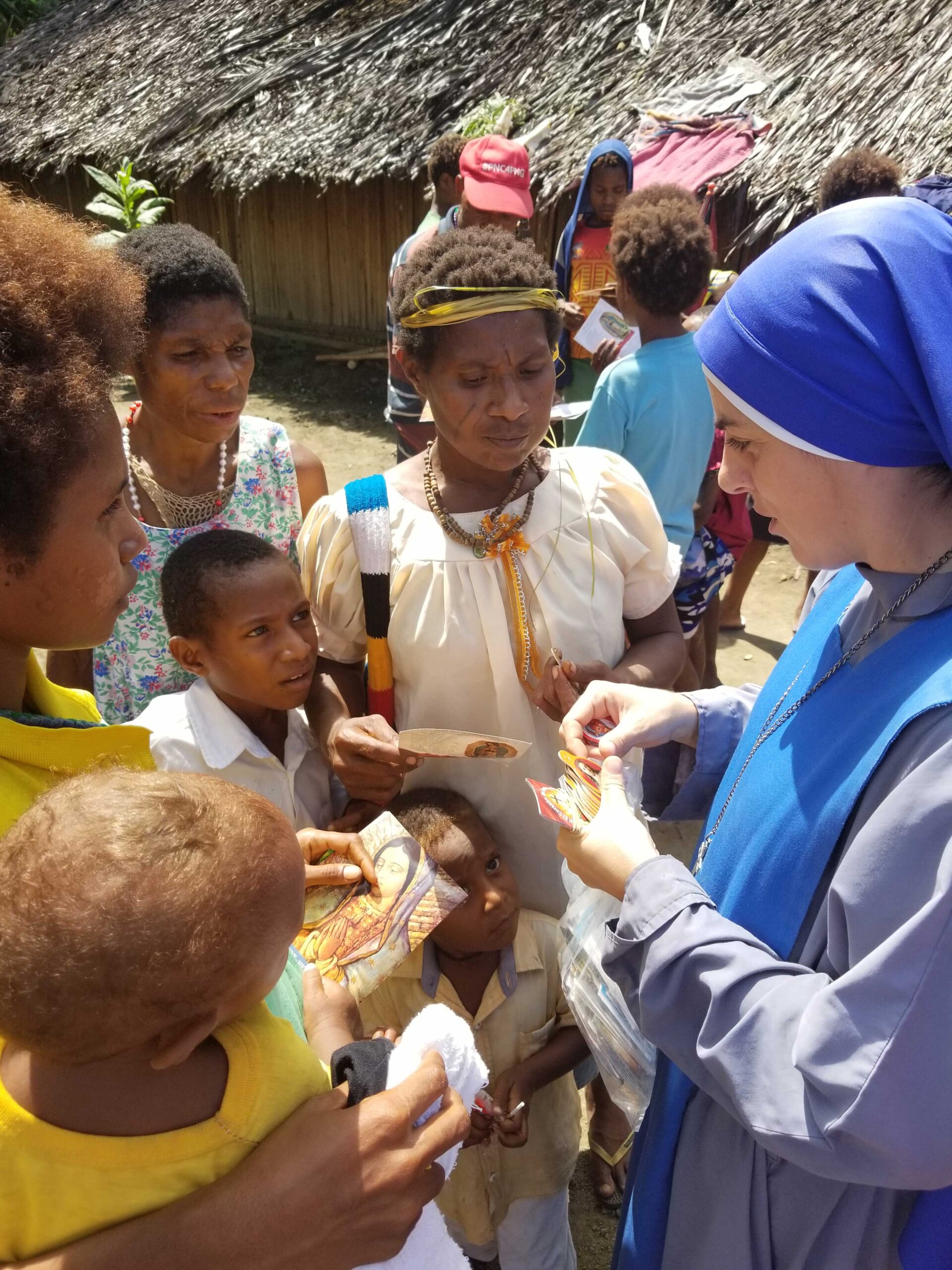 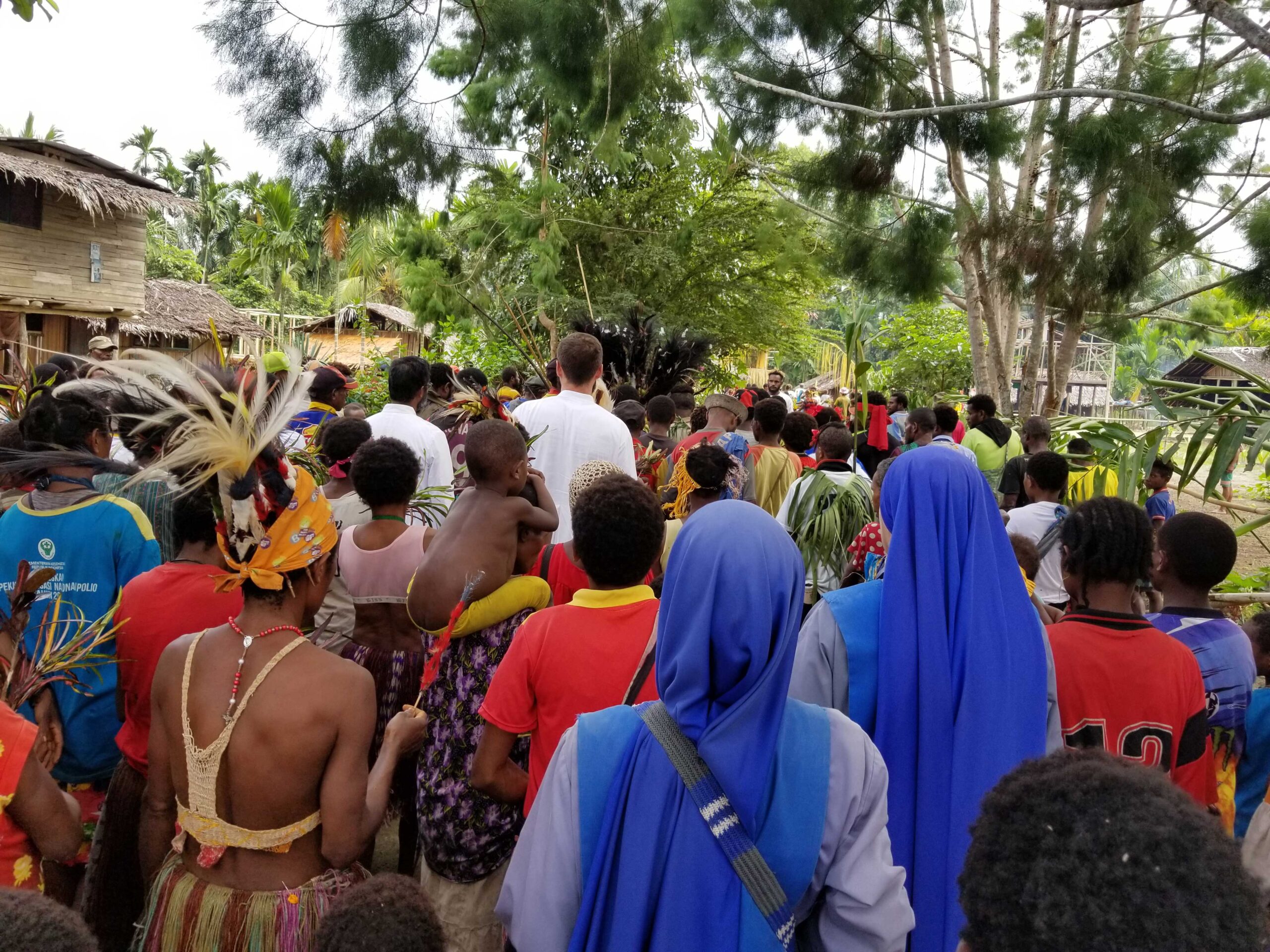