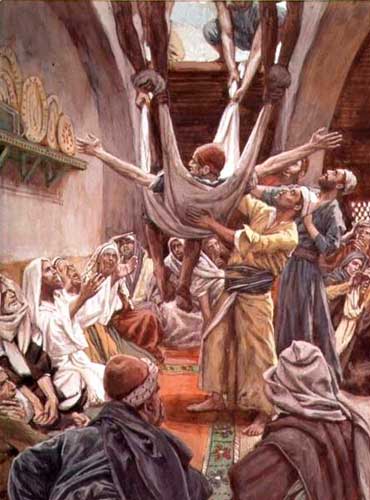 In today’s Gospel Jesus heals a paralytic who was lowered through the roof of a house. There’s a lot that can be said about the events recounted, but two particular details stand out in the sequence of events: first, Luke tells us that “some men” brought a paralyzed man to Jesus and, secondly, when Christ saw their faith (not the man’s faith), He not only forgave the sick man’s sins but also brought him physical healing as well.

Regarding the first, all three synoptic Gospels are very vague about the relationship between those men and the sick man whom they brought to Jesus. We tend to assume that they were his friends, or that they knew him personally, but the text doesn’t actually say that. Matthew doesn’t tell us anything who brought the sick man; we only know that there were more than one because of the way the verbs are conjugated; Mark says only that the sick man was brought by “four.” Luke says simply “men” brought him. They might have been family, but they might also have been strangers, simply people who were moved to help the sick and the suffering.

Second, note that the miracles, first the forgiveness of sins, and then the physical healing, are worked, not because of the sick man’s faith, but rather because of the faith of those who brought him to Christ. This point is clearly expressed in all three synoptic Gospels: the man is healed because of the faith of those people who might not have even known him, the men who simply brought him to Jesus. It’s entirely possible, and indeed likely, that the sick man had no faith at all, since, if he had any, it would have been his own faith that moved Jesus to heal him.

Our lives as religious or even just as a Christian, a Catholic, must be like those random men who brought the sick man to Jesus. With our prayers and our sacrifices, we bring souls to Christ, souls who might not have any faith, who might not want anything to do with Jesus, but who wouldn’t find their way to Him otherwise. For a religious who is willing to sacrifice and spend themselves for souls, there is no limit to what God can accomplish. It’s important to bear in mind, though, that often this work is hidden, and we are left simply to trust that, in heaven, we will know the effects of our prayers.

The story is told of a religious sister, a Poor Clare, who offered herself in prayer and sacrifice for her brother who, though superficially pious, was proud and obsessed with worldly success. At a certain point, when she was the abbess of her community, God revealed to her that her life would end soon, and she offered to endure a great deal of suffering and torments during it. She suffered so much that it seems that “every nerve was racked with pain.”[1] Having offered herself as a “holocaust of charity,” she remained cheerful throughout her illness, and was able to convince her family to leave her brother at the university to study, since it was there that he would reform his life.[2]

Today, that sister is almost entirely forgotten, and very few books mention her role in her brother’s conversion, but the brother we remember, in particular because he is the co-patron of the missions: Saint Francis Xavier. Without his sister, who brought him to Christ’s feet, we might not have one of the greatest missionary saints in the Church.

As we continue our way through Advent, let us ask, through the intercession of Mary, Health of the Sick, for the grace to bring others to Christ through prayer and sacrifice so that, through our faith, they might find grace and healing.